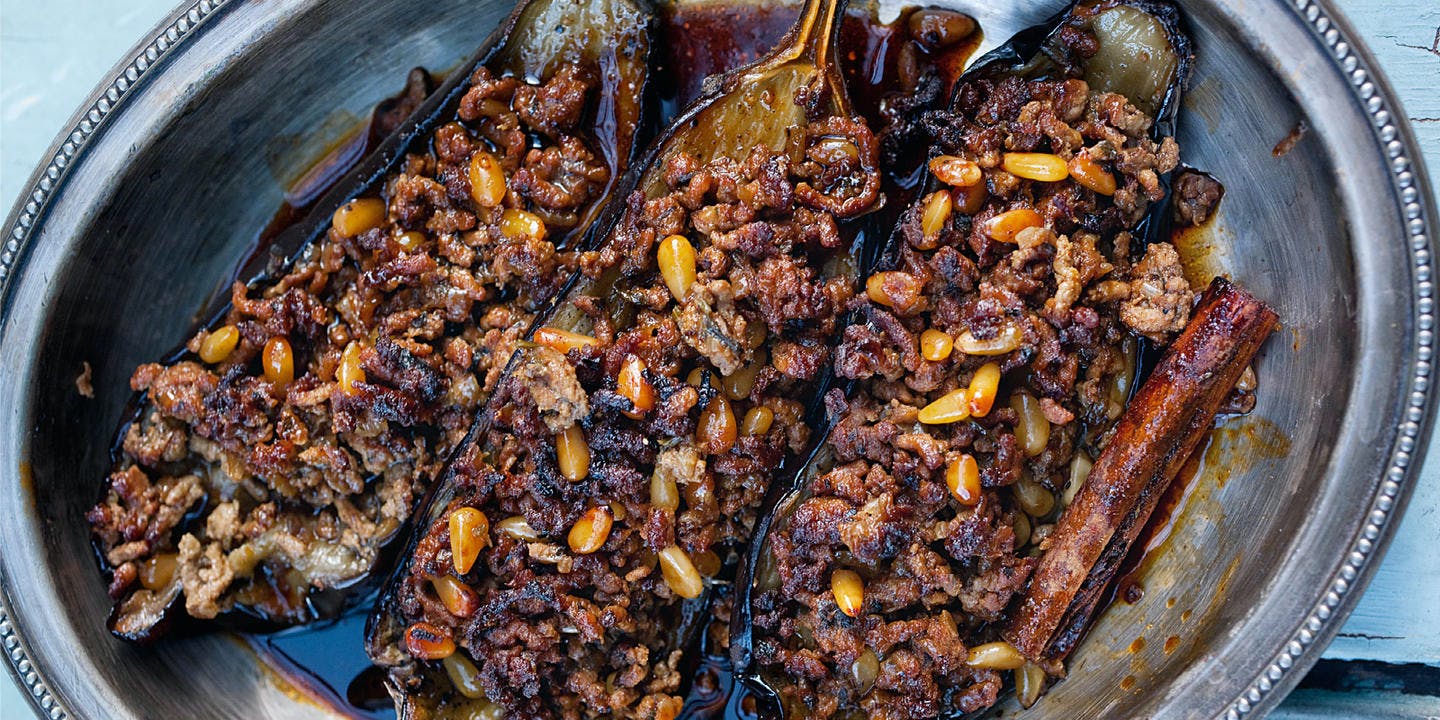 Elran Shrefler is the youngest of Ezra and Rachela Shrefler’s nine children, who run Azura, a restaurant in the heart of Machne Yehuda market that serves Jerusalemites traditional Kurdish recipes with a Turkish influence, the area from which Ezra hails. A member of the Slow Food movement, Elran starts work at four every morning and cooks all his food in massive pots on small oil-burning stove, just as his family has done for generations.

His food, long-cooked stews and hearty soups, is ready for the first customers who arrive at around 8 a.m. (!). It is essentially real fast food — after the long hours of slow cooking, it takes seconds to plate and serve. Elran showed us how to make his stuffed aubergine, Turkish-style, which is our favourite dish at Azura. This is our interpretation.

In their book, The Flavor of Jerusalem, Joan Nathan and Judy Stacey Goldman give a slightly unorthodox recipe for stuffed aubergine with calves’ liver and apples. This is the creation of Deacon William Gardiner-Scott who, in the 1970s, was head of St Andrew’s, the only Presbyterian church in Jerusalem. The church was erected in 1927 to commemorate the capture of Jerusalem by the British during the First World War. This is one of only a few culinary marks the Brits have left behind.

Place the aubergine halves, skin-side down, in a roasting tin large enough to accommodate them snugly. Brush the flesh with 4 tablespoons of the olive oil and season with 1 teaspoon of salt and plenty of black pepper. Roast for about 20 minutes, until golden brown. Remove from the oven and allow to cool slightly.

While the aubergines are cooking, you can start making the stuffing by heating up the remaining olive oil in a large frying pan.

Mix together the cumin, paprika and ground cinnamon and add half of this spice mix to the pan, along with the onion. Cook on a medium–high heat for about 8 minutes, stirring often, before adding the lamb, pine nuts, parsley, tomato purée, 1 teaspoon of the sugar, 1 teaspoon of salt and some black pepper. Continue to cook and stir for another 8 minutes, until the meat is cooked.

Pour the spice mix into the bottom of the aubergine roasting tin.

Spoon the lamb mixture on top of each aubergine. Cover the tin tightly with foil, return to the oven and roast for 1 hour 30 minutes, by which point the aubergines should be completely soft and the sauce thick; twice through the cooking, remove the foil and baste the aubergines with the sauce, adding some water if the sauce dries out. Serve warm, not hot, or at room temperature.

These are deliciously hearty and best served with some bread or simple rice and some pickles on the side.

Packed with mouthwatering recipes inspired by the food of Jerusalem, this is the long-awaited third cookbook from Yotam Ottolenghi, winner of the Observer Food Monthly Best Cookbook award 2013

A vibrant dish for your weekend brunch from Ottolenghi Test Kitchen: Shelf Love.

This divine paella dish is sure to be loved by all.