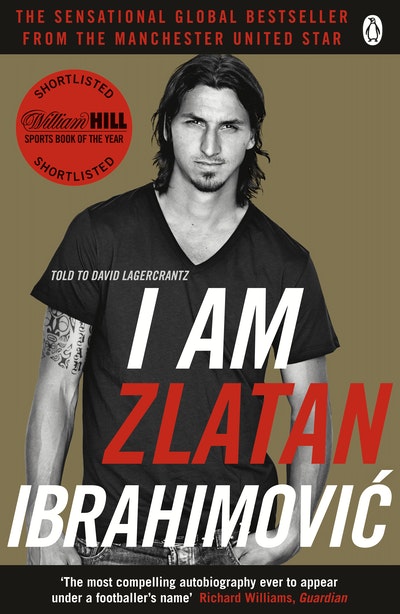 I Am Zlatan Ibrahimovic

The outrageous, critically-acclaimed memoir of one of the world's most gifted and controversial footballers

Zlatan Ibrahimovic - professional football's most mercurial player, Swedish national hero, tabloid fixture, fashion icon, modern day-philosopher and black belt in Taekwondo. Born to a Muslim father from Bosnia, and a Catholic mother from Croatia, Zlatan recounts his extraordinary life story, from his poverty-stricken upbringing as an immigrant in Malmö, Sweden, to becoming one of the world's most sought-after and expensive players, gracing Europe's finest clubs, from Ajax to Juventus, Internazionale to Barcelona, Milan to Paris Saint-Germain.

I AM ZLATAN reveals a rare and ferocious intelligence, willpower and God-given talent most recently exhibited when Zlatan scored all 4 goals for Sweden in a 4-2 victory against England. His fourth goal, a 30-yard overhead kick with his back to goal is widely regarded as one of the greatest goals of all time. The BBC described it as a goal that 'combined unfathomable imagination and expert technique'.

Praise for I Am Zlatan Ibrahimovic

Eagerly awaited, not least because Ibra seems to be spoiling for a fight on every other page. 'Dynamite' said one Swedish reporter

Daily Mail on I AM ZLATAN

The best footballer's autobiography of recent years is probably I Am Zlatan Ibrahimovic . . . In fact, having sold 700,000 copies in Sweden alone and been published in 15 countries, it's probably the bestselling European immigrant's tale since Zadie Smith's White Teeth (2000). The book was also shortlisted for Sweden's prestigious literary award, the August Prize . . . Once you get past the obligatory snigger prompted by the phrase "footballer's autobiography", you can see that Zlatan's book strangely resembles an earlier immigrant's tale: Portnoy's Complaint (1969), Philip Roth's classic novel about growing up Jewish in 1930s and 1940s Newark, New Jersey