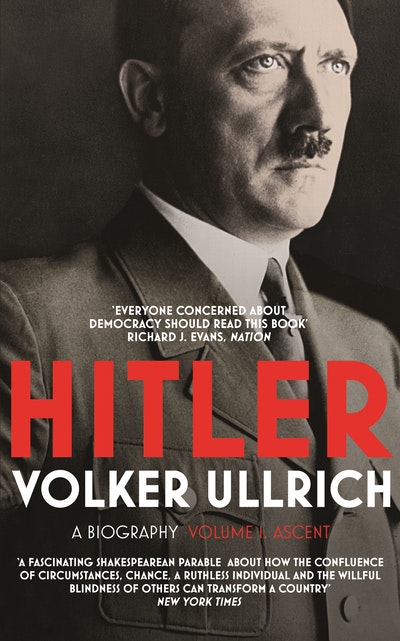 A landmark biography that explores the uncharted territory of Hitler the human being.

Selected as a Book of the Year by the New York Times, Times Literary Supplement and The TimesDespite his status as the most despised political figure in history, there have only been four serious biographies of Hitler since the 1930s. Even more surprisingly, his biographers have been more interested in his rise to power and his methods of leadership than in Hitler the person: some have even declared that the Führer had no private life. Yet to render Hitler as a political animal with no personality to speak of, as a man of limited intelligence and poor social skills, fails to explain the spell that he cast not only on those close to him but on the German people as a whole. In the first volume of this monumental biography, Volker Ullrich sets out to correct our perception of the Führer. While charting in detail Hitler's life from his childhood to the eve of the Second World War against the politics of the times, Ullrich unveils the man behind the public persona: his charming and repulsive traits, his talents and weaknesses, his deep-seated insecurities and murderous passions.Drawing on a wealth of previously neglected or unavailable sources, this magisterial study provides the most rounded portrait of Hitler to date. Ullrich renders the Führer not as a psychopath but as a master of seduction and guile - and it is perhaps the complexity of his character that explains his enigmatic grip on the German people more convincingly than the clichéd image of the monster. This definitive biography will forever change the way we look at the man who took the world into the abyss.

Praise for Hitler: Volume I

Everyone concerned about democracy should read this book.

A superb biography of the Führer’s pre-war years… It is a tribute to Ullrich’s absorbing biography that one contemplates its second volume with a shudder.

[A] fascinating Shakespearean parable about how the confluence of circumstances, chance, a ruthless individual and the wilful blindness of others can transform a country.

A substantial addition to the Fuhrer canon.

David Aaronovitch, The Times, Book of the Year

Where Ullrich adds greatly to our understanding is by making the mercurial, changeable and…profoundly unknowable Hitler believable… This is a major achievement… Impressive and revealing biography.

An eye-opening and enlightening re-examination of the life of the German dictator… As well written as it is informative, this moves the debate on Hitler to a new level.

If Ullrich’s picture fails to present the Führer as a man of depth, it succeeds brilliantly – and so requires to be read as widely as possible – in capturing the instinctive populist.

In a most impressive and massive account, [Volker Ullrich] adds telling details and subtle nuances to the dictator’s portrait and provides a fresh perspective on his rise. The result is a must-read book that is bound to be a critical and commercial success.

[Ullrich] does not go out of his way to belittle his subject and the vulnerabilities he calmly exposes heighten the power of this extraordinary portrait.

I would stipulate emphatically that Trump is not Hitler and the American Republic is not Weimar… Nonetheless there are sufficient areas of similarity in some regards to make the book chilling and insightful reading about not just the past but also the present… If we can still effectively protect American democracy from dictatorship, then certainly one lesson from the study of the demise of Weimar and the ascent of Hitler is how important it is to do it early

[It] is impressive on several counts.

The first volume of Volker Ullrich’s monumental new biography, Adolf Hitler: Die Jahre des Aufstiegs 1889-1939, is beautifully written, as befits the experienced journalist, and deeply and freshly researched, with many new details and a finely balanced judgement, as one would expect from the trained historian.

The archetypal portrayal of a mad and bad dictator is shown to be flawed in this revealing biography, already a bestseller in Germany.

The real strength of this book is in disentangling the personal story of man and monster. Ullrich paints a picture of fear, fury… and pettiness… Any detailed focus on Hitler’s character has in the past led to accusations of relativism. Ullrich’s rigour and sensitivity enables him to succeed.

Volker Ullrich works like a master chef: he trusts his ingredients and uses them with great care. The Hitler that emerges is droll, clever, hysterical, and at the same time alarmingly pragmatic; the reader is able to follow his development from oddball to messiah, propelled forwards by the dynamics between the Fuhrer and his people. Ullrich describes what happened: nothing more, nothing less. And it is exactly this impressive restraint which gives the book its two important qualities: it is both reliable and enormously entertaining.

Timur Vermes, author of Look Who's Back

It is Volker Ullrich's eye for quotation that makes his biography of Hitler so readable and compelling… It is a tribute to this absorbing biography that one contemplates its second volume with a shudder.

Presented in an engaging way. Crucially, too, Ullrich sifts the facts… Ullrich makes his case rather well.

He focuses resolutely on Hitler the person... Ullrich does a particularly good job in assembling testimonies of enemies, friends and neutrals who entered Hitler’s orbit.

A remarkable achievement. Volker Ullrich has read everything and then pieced together Hitler's story in a disarmingly straightforward way. His style is conversational, his arguments lucid and his conclusions always judicious. Is this epic exercise in biography the closest we can get to understanding Hitler's monstrous personality? I'm beginning to think so.