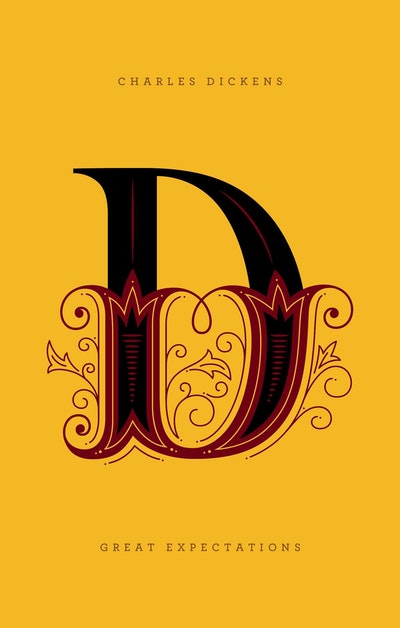 Penguin Drop Caps collect twenty-six stunning hardcovers-one for each letter of the alphabet-featuring cover art by lettering superstar Jessica Hische.
It all begins with a letter. Penguin Drop Caps is a series of twenty-six collectable hardcover editions, each featuring a specially commissioned illustrated letter of the alphabet by type designer Jessica Hische. A collaboration between Hische and Penguin Art Director Paul Buckley, whose series design encompasses a rainbow-hued spectrum across all twenty-six book spines, Penguin Drop Caps debuted with an 'A' for Jane Austen's Pride and Prejudice, a 'B' for Charlotte Brontë's Jane Eyre, and a 'C' for Willa Cather's My Ántonia, and now continues with a 'D' for Charles Dickens' Great Expectations, an 'E' for George Eliot's Middlemarch, and an 'F' for Gustave Flaubert's Madame Bovary.

D is for Dickens. A terrifying encounter with an escaped convict in a graveyard on the wild Kent marshes; a summons to meet the bitter, decaying Miss Havisham and her beautiful, cold-hearted ward Estella; the sudden generosity of a mysterious benefactor-these form a series of events that changes the orphaned Pip's life forever, and he eagerly abandons his humble origins to begin a new life as a gentleman. Dickens's haunting late novel depicts Pip's education and development through adversity as he discovers the true nature of his 'great expectations.'