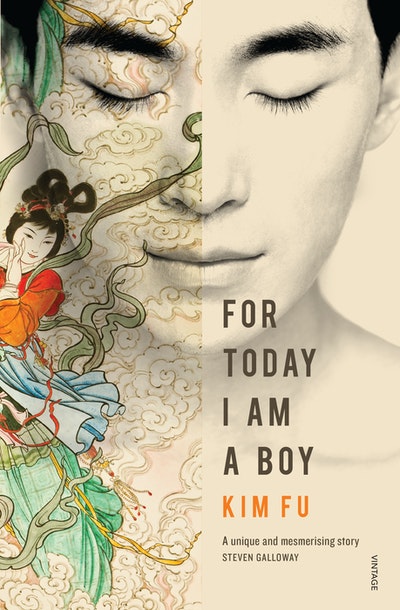 For Today I Am A Boy

Peter Huang and his sisters—elegant Adele, shrewd Helen, and Bonnie the bon vivant—grow up in a house of many secrets, then escape the confines of small-town Ontario and spread from Montreal to California to Berlin. Peter’s own journey is obstructed by playground bullies, masochistic lovers, Christian ex-gays, and the ever-present shadow of his Chinese father.

At birth, Peter had been given the Chinese name juan chaun, powerful king. The exalted only son in the middle of three daughters, Peter was the one who would finally embody his immigrant father’s ideal of power and masculinity. But Peter has different dreams: he is certain he is a girl.

Drawing comparisons from Jeffrey Eugenides' Middlesex to the work of Amy Tan. Sensitive, witty, and stunningly assured, Kim Fu’s debut novel lays bare the costs of forsaking one’s own path in deference to one laid out by others.

For Today I Am a Boy has also been shortlisted for the upcoming Lambda Literary Awards. The novel’s long list of accolades include being chosen for the Barnes & Noble ‘Discover Great New Writers’ program, being shortlisted for the Canadian Authors Association Emerging Writer Award, longlisted for the Flaherty-Dunnan First Novel Prize and for Canada Reads 2015, and being named a New York Times Editor’s Choice.

Kim Fu is columns editor for This, a magazine of progressive politics now in its 45th year. Her poetry, essays, and long-form journalism have appeared in journals and anthologies across Canada and the US. The nonfiction narrative “How We Keep Our Dogs at Bay” won second prize in the 2010 Prairie Fire contest and was republished in the collection Best Canadian Essays 2012 (Tightrope Books). Her essay “Other Words for Cancer” was nominated for a 2011 National Magazine Award, and her exposé on the pro-life movement in Canada, co-written with Andrea Bennett, was a 2013 cover story for Maisonneuve Magazine.

Fu was born in Western Canada in 1987 to immigrant parents from Hong Kong. She did her undergrad at McGill University in Montreal, a double-major in psychology and English literature, where she won the Lionel Shapiro Award for Creative Writing. She was a featured reader at the 2011 Utopia Festival for International Women’s Day, and once performed 125 readings at 125 venues in a single day—with three other poets—for the city of Vancouver’s 125th birthday.

Fu holds an MFA from the University of British Columbia. Though she dabbled at being a restaurant cook, a chemical engineer, a teacher, and a competitive boxer along the way, she now writes and edits full-time. Fu lives in Seattle. For Today I Am a Boy is her first novel. 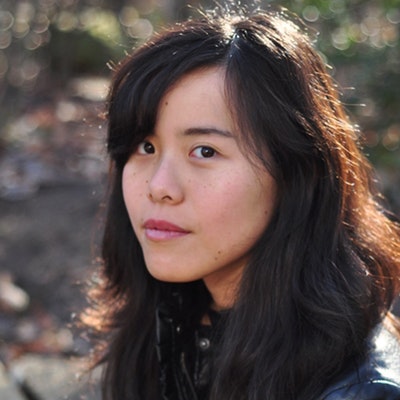 Praise for For Today I Am A Boy

An unflinching observer of personal history, family history and beyond, Kim Fu writes with a pen as sharp and precise as a lancet. For Today I Am a Boy is a novel about gender, race, immigrant life, but it does not let itself be pigeon-holed, just as its protagonist refuses to be defined. A fiercely beautiful novel, the book is the perfect testimony to the fact that no one knows the last word about any human heart.

Just as Amy Tan made a literary career out of the Chinese/American mother/daughter relationship, so debut author Kim Fu looks set to do the same with a culture-clashing Chinese/Canadian father/son.

The story itself contemplates something larger: how to define and defend one’s identity against the clamoring voices of expectation, from both family and society. The story of dictatorial parents and subjugated children is not a new one, but Fu cleverly juxtaposes the narrative of the father’s attempt at cultural acclimation with the son’s search for a female form. In one of the book’s most affecting chapters, both father and son turn to the church, separately but with the same goal — to scrub themselves clean of themselves. What emerges is a familial and familiar pattern of insidious, heartbreaking self-deception. For Today I Am a Boy is as much about the construction of self as the consequences of its unwitting destruction — and what happens when its acceptance seems as foreign as another country.

The sisters are sketched with great vivacity, precision and lustre, and a profound sense of yearning that puts one less in mind of the extroverted odyssey of Middlesex than of the erotic paean to the private world of girlhood in The Virgin Suicides. Fu handles Peter's sexual awakening with unsettling credibility. His awkward affairs - first with a louche cougar who dominates and belittles him, then with a troubled lesbian working towards a religious ''cure'' for her condition - are close encounters attended by a frisson of mortification. Unsatisfactory sex is one of life's great teachers, and it's fascinating to see it portrayed so acutely. Peter's unattainable desire in these encounters - to make the female body and identity his own - also suffuses some superb observations of his sisters. Then too, there are fleeting insights that seem plucked from a universal imagination: ''We listened to the bickering next door. The woman did most of the talking, too shrill for us to make out any words. The man kept saying, 'Easy, easy,' as if his girlfriend were a horse.'' Who has not had that experience? For Today I Am a Boy is a talented debut novel that probes the contours of transgendered experience with elegance and sensitivity.

It's also rich with metaphors of identity on multiple levels, and lit with unexpected, pawky humour. We find that male baldness is particularly humiliating for a trans-sexual; that God has an inconsiderate habit of giving advice during ice baths. A debut distinguished by subtlety and quiet, and one which makes you sit very still as it follows its protagonist towards a precarious happiness. You'll be intrigued and moved.

This is a compelling tale and has real insight into the dilemmas of identity, both cultural and gender, for those who don't fit easily into a dominant set of expectations.

While Peter's circumstances are specific, the challenges he faces leap national and cultural divisions. While Peter is always the focus, the plot is enriched by explorations of his relationships with his workmates and family. Most enjoyable is this first-time novelist's knack for painting effective imagery with minimal words. This is a moving story that is elegantly told.

A twist on the cookie-cutter coming-of-age tale. Fu tells the captivating story of Peter Huang, a transgender Chinese student struggling to fit in - both with the world and his family - as his parent's only son. Fresh, poetic and superhaunting, it's receiving the kind of rapturous early reviews most debut novelists can only dream of. Five stars from us.

Fu’s book is primarily about one man’s unusual coming of age, but she also wrings singular truths from well-worn themes of familial shame and envy. Fu has written a novel about alienation without lapsing into self-pity: a book that not only charts an outsider’s perspective, but the relationships that form, enrich, and complicate his journey.It has become cliché to hail an exciting “new voice” in fiction, and many are drowned out by their own hype. In so convincingly transporting her reader to a perspective still relatively new to contemporary fiction, Kim Fu should be an exception.

Trilby Kent, The Globe and Mail

Debut author Fu’s sharp eye and the book’s specificity of place (the Huangs live in small-town Canada, where Peter’s father does whatever it takes to fit in and the rest of his family lies to him) provide freshness. Although the focus is always Peter, Fu is adept at depicting the shifting alliances between him and his sisters, and at revealing how being an outsider shapes Peter’s expectations and options.

This book brilliantly touches on many social issues, but it is also a story which shines all on its own. And Peter is a fully realized, fully unique character — one who will find his way into the hearts of readers everywhere.

With For Today I Am A Boy, on the other hand, Kim Fu has already proven herself to be an interesting author. Unlike Mother, she doesn’t have to worry about remaining anonymous; I’d wager a lot more people will know her name before long.

Powerful… Written with unwavering focus… Fu explores the shape of gender and culture in a unique and mesmerizing story populated with characters who are fragile and strong all at once, who invite us to become them as they struggle with who they ultimately are. An important and rewarding read.

Steven Galloway, The Cellist of Sarajevo

For Today I Am a Boy is beautiful and captivating. Kim Fu reminds us that the human condition is one of change—of becoming, of overcoming—and this novel, in all its complexity, demonstrates how to do so with grace.

Quietly forceful… While the book has its share of clashes with bigotry, its strength is in its interiority: Fu subtly and poetically evokes the intensity of need her narrator feels to become female. [...] Fu is skilled at capturing feelings of rootlessness that go beyond gender, encompassing Peter’s immigrant-son status and distance from his family. All of Peter’s emotional baggage makes the novel tonally somber, but Peter’s search for a sense of normalcy—to finally become his female self—has a redemptive trajectory that feels fully earned. A study of transexuality that’s shot through with melancholy while capturing the bliss of discovering one’s sexual self.

In this impressive debut, Fu sensitively and poetically portrays Peter’s predicament so that readers feel his discomfort with his own body as well as his painful sense of yearning.

It is framed as the coming-of-age tale of Peter Huang ... But For Today I Am a Boy isn't an exploration of transgenderism exclusively. Fu uses the topic as a lens to examine the complex idea of femininity and womanhood.

This powerful first novel by Canadian writer Kim Fu is haunting and poetic.

Here’s a little warning for you: from the first sentence of the prologue, it’ll be hard to resist “For Today I Am a Boy.” That’s because this is an absolutely gorgeously told story that author Kim Fu hands us. But it’s so appealingly melancholy, too. For the first two-thirds of this book, Peter is unsure of his own desires, other than to become like his sisters. Fu gives him a sense of confusion that’s almost surreal at times. We sometimes can’t decide whether he’s thinking or doing, and it’s difficult to predict what will happen to him. As a literary device, the guessing game thoroughly works. And the ending is absolutely perfect.