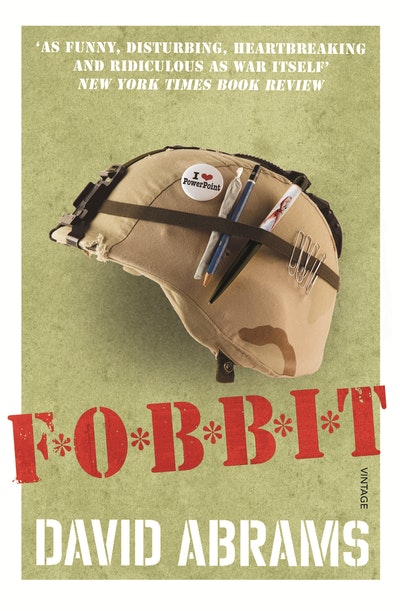 Fobbit ’fä-b t, noun. Definition: A U.S. soldier stationed at a Forward Operating Base who avoids combat by remaining at the base, esp. during Operation Iraqi Freedom (2003–2011). Pejorative.

Welcome to the FOB – Baghdad’s Forward Operating Base Triumph. This is the back-office of the battlefield, where Staff Sergeant Chance Gooding (a Fobbit through and through) spends his days tapping out press releases to turn the latest roadside bomb into something the folks back home can read about over their breakfast cereal. This is where male and female soldiers are trying to find an empty Porta-Potty in which to get acquainted, grunts are playing Xbox between missions, and most of the senior staff are more concerned about getting to the chow hall in time for the Friday night all-you-can-eat seafood special than worrying about little things like military strategy. This is where things can very quickly spiral out of control.

David Abrams served in the U.S. Army for twenty years, and was deployed to Iraq in 2005 as part of a public affairs team. His stories have appeared in Esquire, Narrative and other literary magazines.

In this wickedly funny novel, Abrams sees right past the self-aggrandizing illusions and comforting fairytales that tuck the US in at night.

As funny, disturbing, heartbreaking and ridiculous as war itself

[Hilarious]... It is the rare writer – indeed, the rare person – who can step outside of himself and see with cold clarity the humor and pathos of his situation and then bring the reader to the same understanding. David Abrams is such a writer

Fobbit blends fiction and journalism, an apt reflection of literary influences combined with [Abrams’s] experience in an Army public affairs team... Though absurd, these Dickensian characters are all so skillfully wrought that we quickly accept their idiosyncrasies... What’s most intriguing about this work is that, at its center, it is both a clever study in anxiety and an unsettling expose of how the military tells its truths

[Abrams has] a genuine sense of humor...and a productive sense of irony to go with it. Fobbit is an impressive debut and holds out promise for more good things to come

Fobbit is fast, razor sharp, and seven kinds of hilarious. It deserves a place alongside Slaughterhouse Five and Catch-22 as one of our great comic novels about the absurdity of war

When it comes to war literature, a comic novel will always do a better job with the big picture

Fobbit, an Iraq-war comedy, is that rarest of good things: the book you least expect, and most want. It is everything that terrible conflict was not: beautifully planned and perfectly executed; funny and smart and lyrical; a triumph. This debut marks the arrival of a massive talent

A satire of comfortably numb life during wartime... Abrams spent 20 years in the Army, including a tour of Iraq, and he merely has to lightly fictionalize his observations to point out the absurdities of American occupation

An instant classic... The Iraq War’s answer to Catch-22

This is a book that speaks to the power of fiction - a war story too profane and profound for the newspapers and the nightly news. Want to think, laugh and cry, all at the same time? Read this novel.

This delightful, readable, believable and useful book made me furious!

Abrams is...convincing... Fobbit is a vicious skewering of this surprisingly large military subculture of war avoidance

A unique behind-the-wire glimpse at life in the FOB and the process of “spinning” a war for public consumption. A funny, hard-edged satire about recent history and modern war-making

Sardonic and poignant. Funny and bitter. Ribald and profane

You might not expect an Iraq War novel to be funny, but I laughed—more than once—as I read this one. I cringed, too. There’s simply so much to this book

Truly significant... a book about the absurdity of the way the war is fought, the way the war is projected back home, and the massive gulf between the two...a cynical satire in the same vein as the best works of legendary wartime authors like Evelyn Waugh, Kingsley Amis, Kurt Vonnegut, and especially Joseph Heller.

Fobbit is two things in one – a scathing, deeply felt diatribe against military disasters large and small, and an often-hilarious examination of very human, very weak characters living next door to a combat zone. The good news is that you only have to buy one copy, and you should waste no time in doing so

Fobbit should be required reading for America. Hilarious and tragic, it’s as if Louis C.K. and Lewis Black provided commentary to The Hurt Locker. There will be innumerable comparisons to Catch-22, but Fobbit, believe me, stands on its own

Funny and evocative, with great glimpses of soldier-speak and deployment day to day life, each laugh in the novel is accompanied with a troubling insight into the different types of battles that our soldiers encounter on a non-traditional battlefield

Siobhan Fallon, author of You Know When the Men Are Gone

The author describes Fobbit as an ‘anti-stupidity’ novel, not an anti-war novel, and with 20 years’ service he has the evidence and flair to write the former... Fobbit is bliss

Abrams shows these men and women in their natural habitats, stuck somewhere halfway between the actual violence of war and the goofy excess of American culture

The insanity is linguistic, and Abrams’s dark humor about lying through language would appeal to George Orwell... Fobbit invites us to laugh over our collective foolishness—foolishness that sometimes includes deaths. That’s the toughest, most painful laughter of all

“[Fobbit] gives such full-blooded life to the soldiers whose “pale, gooey center” is so antithetical to battlefield heroism that he propels the word into the everyday by the force of his narrative

If Vonnegut and Heller were the undisputed chroniclers of the madness of World War II, Abrams should be considered the resounding new voice of the Iraq War

[As] dark as it is funny, which is to say considerably... [Abrams has] written a book that makes you laugh and makes you wince, often at the same time, all the while staying true to its message: that people are foolish on many levels, sometimes fatally so, but they are all motivated by the same basic needs, desires, and fears...There are no heroes here, but no villains either. Each character fights his own war, and nobody wins

Though Fobbit is a satire…its value lies more in the fact that it’s a very detailed, very informative portrait of the madness in Iraq in the early years of the American occupation. The sights and sounds are adroitly rendered, the damnable heat skilfully rendered in text. There are times when you can almost smell the gore on the concrete

An enjoyable and alternative take on war