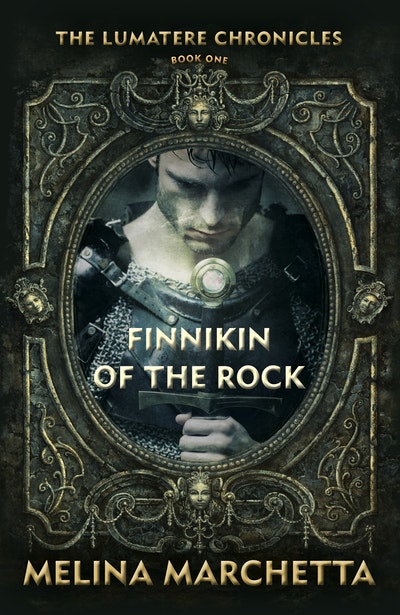 Finnikin of the Rock

Finnikin has not been home to his beloved Lumatere for ten years. Not since the dark days when the royal family was brutally murdered and the kingdom put under a terrible curse. But then he is summoned to meet Evanjalin, an enigmatic young woman who claims the heir to the throne still lives. She is determined to return home and Finnikin is affected by her arrogance . . . and her hope. He begins to believe he will see his childhood friend, Prince Balthazar, again. But the truth will test Finnikin's faith in Evanjalin . . . and in himself.

'Magic, romance, intrigue, and adventure all play their parts as this dense, intricate epic unfolds, and flawed, memorable heroes fight for their kingdom's redemption.' Publishers Weekly (starred review)
'Finnikin is a ripping fantastical adventure. In a word: marvelous.' Herald Sun

'Finnikin of the Rock is made all the more enjoyable by its tough, sensual, flawed, brutal passionate and compassionate characters.' Chris Thompson, Viewpoint Magazine

'Filled with questions about the impact of exile and the human need to belong, this standout fantasy quickly reveals that its real magic lies in its accomplished writing.' Booklist starred review

'A shining story of romance, adventure in all of its gritty realism, and high ideals.' School Library Journal starred review

'All the components of an epic fantasy novel. . . one of the best of the year.' Teenreads.com

'This fantasy has it all - magic, intrigue, bloodshed, and romance. . . the plot and the characters are complex and truly believable.' Library Media Connection (starred review)

'A magical, memorable story that will not soon leave you. If you like your protagonists (both male and female) smart and strong, and you like your romance heart-stopping, this is the book for you.' Shelftalker blog - Publishers Weekly

'A narrative crackling with the tension of an imminent storm . . . While a measure of magic can be attributed to her careful pacing, the swoon factor is mostly because of her characters. They're rich, they're real, they're infinitely dimensional.' YA Highway blog

'Marchetta has created a complex and often dark world. The stakes are high-- And yet - love survives, and life, and happiness, and even hope . . . I love, love, love Finnikin of the Rock.' A Chair, a Fireplace & a Tea Cozy

'Even readers who tend to avoid fantasy will find themselves fully engrossed in this harrowing tale.' Bulletin of the Center for Children's Books (starred review)

'A rousing and complex plot filled with political intrigue.'Kirkus Reviews

'Marchetta is a marvelous storyteller. . . . Finnikin of the Rock has all the makings of a classic.' Bookpage

Melina Marchetta is an internationally bestselling and award-winning author in more than twenty countries and eighteen languages. Her seventeen books range from beloved young adult fiction and fantasy through to contemporary and crime fiction, and works for younger readers. Her much-loved Australian classic Looking for Alibrandi swept the pool of literary awards when it was published, and was also released as a film, adapted by Marchetta, winning an AFI Award and an Independent Film Award for best screenplay, as well as the New South Wales Premier’s Literary Award and the Film Critics Circle of Australia Award. In 2009 Marchetta won the prestigious Michael L. Printz Award from the American Library Association. Her most recent novel is The Place on Dalhousie. She lives in Sydney.