On the first day no one really noticed. Perhaps there was a chuckle among the midwives at the sight of all those babies wrapped in blue blankets, not a pink one in sight. Individual hospitals would’ve thought nothing of it. They wouldn’t have known that this day of blue was only the beginning.

On the second day they frowned, confused, at another twenty-four hours of blue.

How baffling. Still, they assumed it was nothing more than coincidence. The Y chromosome was just making more of an appearance than usual.

On the third day, the media made light of it ‒ It Really Is A Man’s World. That brought the situation to everyone’s attention. Doctors and nurses realized theirs wasn’t the only hospital to go blue. Blue was taking over. Not just entire hospitals, not just entire countries, but the entire world.

Where had the pink gone?

With approximately two and a half million babies born each week, half of whom were usually girls, the sudden imbalance couldn’t be ignored. World leaders were called together with the most respected scientists to try to understand what was happening and discuss measures they could take to monitor the situation. They had to find an ethical way of working – they didn’t want to strip people of their human rights. That was what they said.

At first it was a phenomenon, but soon it was threatening the survival of humanity, leaving us all on the brink of extinction. That was when governments stopped being nice. When women became more controlled and oppressed than ever before.

Compulsory tests were carried out. To start with, pregnant women were screened to identify the sex of their unborn children. Then, as more time passed with no females born, all women under the age of fifty were examined in an attempt to determine the cause of the blue generation.

Sex was encouraged – those in power wanted lots of babies in the hope that the odds would eventually favour girls. And there were girls – they were spotted in utero, bouncing around in the amniotic fluid and nudging their mummies with their flailing arms and legs.

Eventually those cases disappeared. There was no pink to be seen . . . or lost.

Science battled for years. And years. And years. No cause was found. There was no breakthrough. Without a cause there could be no cure. The future of humanity was ticking away with the biological clocks of any remaining fertile women.

They would never give up, the world was told. They would save the human race. Somehow.

And the people played their part. They prayed. Prayed to many gods to grant them the rebirth of their kind. For a long time it seemed no one was listening. The people prayed harder, for longer, calling on different all-powerful beings with urgency. They unearthed old religions, forged new ones, and muttered their worshipful chants with longing.

Then, after a fifty-year female drought, a miracle happened – and it didn’t occur in a sterile science lab.

Corinne and Ernie Warren had been married for twenty-five years. They’d always wanted children but it seemed Mother Nature wasn’t on their side. Corinne suffered miscarriage after miscarriage until eventually the couple gave up their dream to become parents. She was struck off as a potential carrier when she was forty-

three. They accepted the failure with much sadness and a hint of relief. They’d been beaten down by grief so many times. They were broken, but at least they had each other to cling to.

At fifty-one, eight years later, Corinne unexpectedly fell pregnant. Naturally. She and Ernie were thrilled, but full of fear. What if this baby was taken from them like all the others? They couldn’t face another miscarriage.

Like every woman, Corinne was screened – but, unlike other women, she and Ernie welcomed the tests. They wanted to be sure their baby was fit and healthy ‒ they wanted to do all they could to ensure the safe arrival of the little being they already loved so much and for whom they would do anything. Their hearts leapt when they saw their creation stretching on the ultrasound. Their baby. Their joy.

For the midwife dealing with Corinne, the screening process had become routine – a monotonous series of tests with invariably the same outcome. She didn’t expect to see anything but blue.

But there it was.

And her appearance made quite an impact.

It caused a panic. The result in that examination room sent shockwaves of hysteria rippling around the globe. People couldn’t believe that good news had come at last.

They were longing to be told more about the couple who offered them a glimmer of light.

But Corinne’s medical history of miscarriages, her age and the fact that no girls had survived in utero for decades was a cause for concern. Corinne and Ernie were moved into a specialized medical facility to maximize the chances of the pregnancy going full-term. Other than daily scans, no tests were carried out. This time Mother Nature was allowed to take her course – at least until there was any reason to interfere. Perhaps it was time to trust the human body again.

Corinne and Ernie understood the need for monitoring their baby’s development and the desire to keep their daughter safe. They were happy their child was as special to others as she was to them. They didn’t resent the restrictions placed on them. Or that they were allowed no visitors at all. They agreed they’d do whatever it took to bring their baby safely into the world.

There were complications in the delivery room. Mother and daughter were left fighting for their lives. Corinne died soon after giving birth, having fulfilled her life’s ambition to become a mother.

Ernie was grief-stricken, unable to deal with the loss of his wife. Incapable of being a father.

He never held his daughter.

Never told her he loved her.

And what of the baby girl?

The world had waited for her arrival with bated breath, longing for the news that their hopes had been realized, that their girl had been born.

Against all odds, she survived.

She was the first girl born in fifty years.

They called her Eve.

She represented the rebirth of the human race. She was the answer to their prayers. She was all they cared about, their final hope.

Eve was the saviour of humanity. 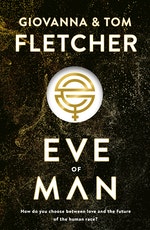 Against all odds, she survived. The first girl born in fifty years. They called her Eve.