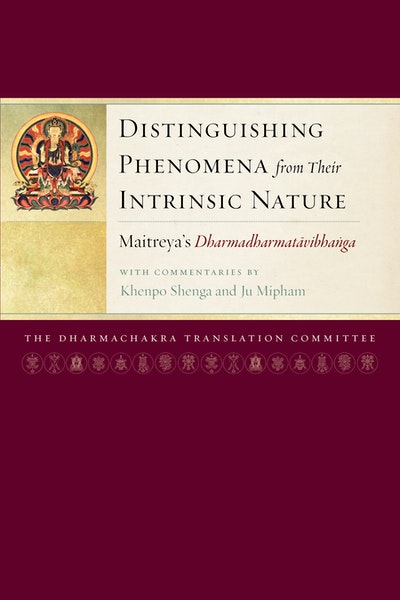 Distinguishing Phenomena from Their Intrinsic Nature

Maitreya's Dharmadharmatavibhanga with Commentaries by Khenpo Shenga and Ju Mipham

Outlining the difference between appearance and reality, this work shows that the path to awakening involves leaving behind the inaccurate and limiting beliefs we have about ourselves and the world around us and opening ourselves to the limitless potential of our true nature.

The Buddhist masterpiece Distinguishing Phenomena from Their Intrinsic Nature, often referred to by its Sanskrit title, Dharmadharmatāvibhaṅga, is part of a collection known as the Five Maitreya Teachings, a set of philosophical works that have become classics of the Indian Buddhist tradition. Maitreya, the Buddha's regent, is held to have entrusted these profound and vast instructions to the master Asaṅga in the heavenly realm of Tuṣita. By divesting the mind of confusion, the treatise explains, we see things as they actually are. This insight allows for the natural unfolding of compassion and wisdom. This volume includes commentaries by Khenpo Shenga and Ju Mipham, whose discussions illuminate the subtleties of the root text and provide valuable insight into the nature of reality and the process of awakening.