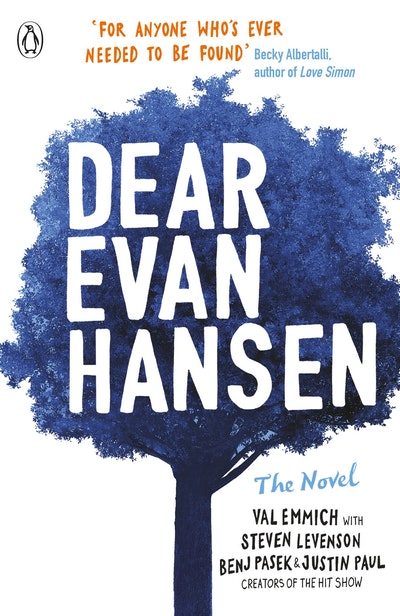 The groundbreaking novel inspired by the Broadway hit, and written by the show's creators. Soon to be a major film!

High school senior Evan Hansen has been given the chance of a lifetime: to belong.

When the notoriously troubled Connor Murphy took his own life, he did so in possession of a letter Evan had written to himself. Now everyone thinks they were best friends.

As he helps Connor's family deal with their grief, it's clear that Evan isn't invisible anymore - even to the girl of his dreams. Every day is suddenly amazing.

But Evan is soon pulled deeper into Connor's family's swirl of anger, regret, and confusion. And then everything starts to go wrong . . .

Val Emmich is a writer, singer-songwriter, and actor who was dubbed a 'Renaissance man' by the New York Post. His debut novel, The Reminders,received rave reviews.

Steven Levenson is the Tony Award-winning book writer of Dear Evan Hansen. His plays include If I Forget, The Unavoidable Disappearance of Tom Durnin, Core Values, The Language of Trees, and Seven Minutes in Heaven.

PRAISE FOR DEAR EVAN HANSEN: A gorgeous new musical for anyone with a beating heart

One of the most remarkable shows in musical theatre history

As eagerly awaited as Hamilton

A must-read for teens and those who care about them

Even in book form, Evan Hansen's story sings. Required reading, especially for anyone who's ever needed to be found

Dear Evan Hansen: The Novel is a terrific reinvention of an already brilliant piece of art

Yep, the hit musical will make you cry just as much in book form