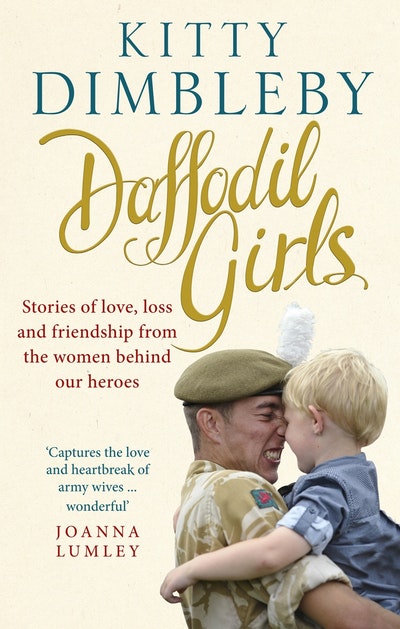 Stories of Love, Loss and Friendship from the Women Behind Our Heroes

Ever wondered what it is like to support a loved one in the armed forces? Army wife and journalist Kitty Dimbleby reveals stories of life, love and loss from the women behind the front line.

For every brave soldier putting their life on the line for Queen and country, there is a second, more subtle sort of heroism at work back at base in Britain. Daffodil Girls is the story of the women behind the soldiers of The 2nd Battalion The Royal Welsh. Granted unprecedented access into this most private of communities, writer Kitty Dimbleby brilliantly brings to life the lot of a soldier’s wife, as she follows these women through the cycle of a regiment’s tour of duty: the preparation for departure, the six long months of action and the emotional reunion.

Insightful, humorous and deeply moving in turn, Daffodil Girls captures the unique bond of friendship and indomitable spirit that is forged in such circumstances – the extraordinary world of the heroines behind our army heroes.

Kitty Dimbleby has been working as a journalist for 10 years, writing for the Evening Standard, Daily Mail and the Mail on Sunday. She has also contributed articles to The Times, The Guardian, Cosmopolitan and Metro. In 2007, she reported from Iraq and visited Basra Palace, the former British Army base and in 2008, Kitty followed that particular field assignment with a visit to Afghanistan.
Kitty is passionately involved with the charity Help for Heroes - working for the past year as part of their media team and editing the charity's quarterly magazine, Heroes. She is married to a major in the Kings Royal Hussars. They live in the army garrison town of Tidworth, Wiltshire.

The 2nd Battalion The Royal Welsh is an armoured infantry battalion based in Tidworth, Wiltshire.

Daffodil Girls is touching, fascinating, sensitively written and, no doubt, required reading for any prospective Army spouse. And for anyone who's ever wondered what goes on in those garrison towns.

The Daffodil Girls show as much patriotism, courage and public service as the soldiers themselves ... These women are the heroines who cherish their heroes.

How touching to hear the inside stories of the ones they left behind - Kitty Dimbleby's poignant book captures the love and heartbreak of Army wives threaded through with courage and enormous humour - wonderful.

This is a timely and charmingly told account of the lives of the "force behind the forces" - the families of those brave soldiers who are risking lives and limbs on the front line.

This is a moving tribute to the wives and families who are left behind when Britain's soldiers go out to fight- the story of their courage in the face of separation, loneliness and fear for those they love. Kitty Dimbleby's message is that war breeds more than one kind of hero worthy of our admiration and support.

These "Daffodil Girls", and scores of other army wives like them, are indeed amongst the unsung heroines of our times; and we as a nation owe not just their husbands, but these women too, an enormous debt of gratitude for all they achieve. Thank you so much for this book Kitty - I can not recommend it more highly to Service and civilian readers alike - It's a real gem!