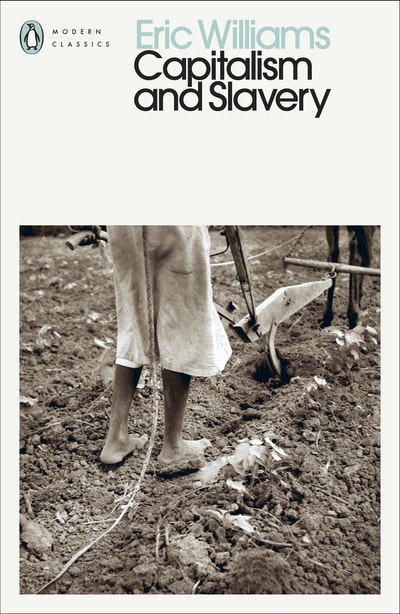 The paradigm-shifting classic that connected the dots between transatlantic slavery, capitalism and racism

'If one criterion of a classic is its ability to reorient our most basic way of viewing an object or a concept, Eric Williams's study supremely passes that test' Seymour Drescher

Arguing that the slave trade was at the heart of Britain's economic progress, Eric Williams's landmark 1944 study revealed the connections between capitalism and racism, and has influenced generations of historians ever since. Williams traces the rise and fall of the Atlantic slave trade through the eighteenth and nineteenth centuries to show how it laid the foundations of the Industrial Revolution, and how racism arose as a means of rationalising an immoral economic programme. Most significantly, he showed how slavery was only abolished when it ceased to become financially viable, exploding the myth of emancipation as a mark of Britain's moral progress.

Eric Williams (1911-1981) was a pioneering historian and politician born in Port of Spain, Trinidad and Tobago. He graduated with first-class honours from St Catherine's College, Oxford in 1935, and completed a DPhil in History in 1938. His dissertation, 'The Economic Aspects of the Abolition of the Slave Trade,' was published as Capitalism and Slavery in 1944, while he was a professor at Howard University. In 1956, Williams founded the Republic of Trinidad and Tobago's first modern political party. He led the country to independence from the British and became the nation's first prime minister in 1962.

Praise for Capitalism and Slavery

This book, recommended to me by a Jamaican fellow-student in 1968, changed my view of the world. It was the first time I was brought up hard and fast, face to face, with how modern Britain developed off the back of the transatlantic slave trade and the wealth created from the labour of slavery

A vital, urgent read. A forensic examination of the system behind systemic racism. Eric Williams succinctly sets out how racism, and all its implications, injustices and inhumanities, was a harrowing repercussion of slavery, invented as a justification for lining a few dead men's pockets

No historian of colonialism or slavery can ignore Eric Williams. This book endures as a seminal moment in the historiography of the British Empire

Michael Taylor, author of The Interest

It's often said that books are compulsory reading, but this book really is compulsory. You cannot understand slavery, or British Empire, without it.

Wherever you stand on the legacies of slavery and colonialism, Williams' elegant, passionate analysis is simply inescapable. Essential reading for anyone who really cares about history.

The slave trade built capital for the slave-owning Empire, on which the Industrial Revolution was formed. The slave trade was abolished not because of moral outrage but because of a decline in returns. Slavery and capitalism are linked, and Williams launches a full frontal attack on it in this classic, which first appeared almost a century ago. Essential reading for anyone who wishes to know more about the Caribbean.

Monique Roffey, author of The Mermaid of Black Conch

Groundbreaking and inspiring - a gripping, brilliantly original analysis of British slavery, racism, and the enduring legacies of imperialism

Since Capitalism and Slavery was first published some eighty years ago, no writer on the subject has been able to ignore it. It is a true classic

Hakim Adi, University of Chichester, author of Pan-Africanism: A History

A superb book about the history of the transatlantic slave trade that basically became a manifesto for the independence of Williams's own country ... Williams is an extraordinary figure, particularly if you're interested in the way certain kinds of observations of injustice can motivate research by historians that, ultimately, lead to massive political change.

Few books stand the test of time and remain a catalyst for continuing historiographical debate. Capitalism and Slavery on all accounts is one of these rare books.

Anthony Bogues, Asa Messer Professor of Humanities & Critical Theory and Inaugural Director of the Center for the Study of Slavery & Justice, Brown University

Capitalism and Slavery sparked a scholarly conversation that has yet to die down. In many ways, the debates it generated are more vibrant now than ever and promise to be a lasting touchstone for historians well into the future.

Few works of history have exerted as powerful an influence as Capitalism and Slavery.

Steven Mintz, Professor of History & member of the Society of American Historians, the University of Texas at Austin

Williams's masterwork is so rich with ideas and historical insights that it still speaks to today's historiography.

It is a work of conceptual brilliance, intellectually mature, bold, incisive, and immensely provocative... Capitalism and Slavery will remain a historical treasure.

One of the most learned, most penetrating and most significant [pieces of work] that has appeared in this field of history.

Eric Williams's study identifies many of the sinners and the sins committed in the building of British and global capitalism ... Capitalism and Slavery makes us stare down that history and compels us to seek redress from the relevant culpable parties

There can be no effective understanding of modernity and the post-colonial world without an engagement with Eric Williams' Capitalism and Slavery. This is where the rubber hits the road.

Prof. Sir Hilary Beckles, Vice-Chancellor of the University of the West Indies