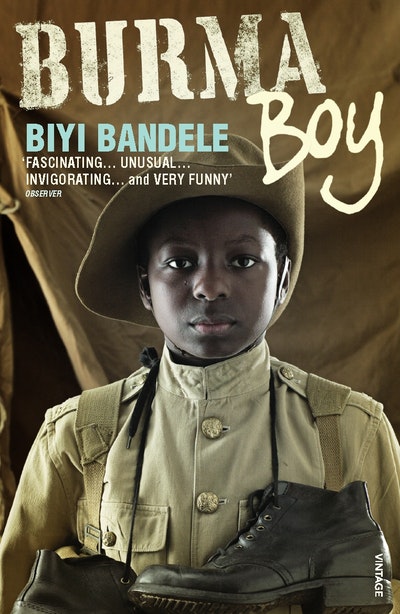 An intense, moving and funny tale of African soldiers in World War II, the first novel to bring narrative light to this neglected history.

A few months ago fourteen-year-old Ali Banana was apprenticed to a whip-wielding blacksmith in his rural hometown. Now its winter 1944, the war is entering its most crucial stage and Ali is a private in Thunder Brigade. His unit has been given orders to go behind enemy lines and wreak havoc. But the Burmese jungle is a mud-riven, treacherous place, riddled with Japanese snipers, insanity and disease.

Burma Boy is a horrific, vividly realised account of the madness, the sacrifice and the dark humour of the Second World War's most vicious battleground. It's also the moving story of a boy trying to live long enough to become a man.

Biyi Bandele is an award-winning novelist, playwright, and poet. He was born during the Biafran War in Kafanchan, Nigeria in 1967. His plays have been seen at the Royal Court Theatre, the Gate Theatre, the Barbican, and have been performed by the Royal Shakespeare Company. He lives in London. In 2006 he was named by the Independent as one of Africa's fifty most important artists.

As humane, ridiculous and moving as Waugh's novels of the world at war

A gripping narrative - by turns pathetic, comic and exciting

Vividly recreates the violence and drama of a forgotten war, describing the camaraderie between fighting men with humour and compassion

A hauntingly beautiful elegy for those who killed and died in the service of a history that was not their own. Like Ha Jin's magisterial War Trash, Burma Boy wields the two greatest weapons in the novelist's arsenal - imagination and empathy - to shattering effect

A riveting read, convincingly imagined and cinematically told. Bandele is a gifted storyteller

A truly fantastic book. A caesarean cut through terrifying and hilarious history