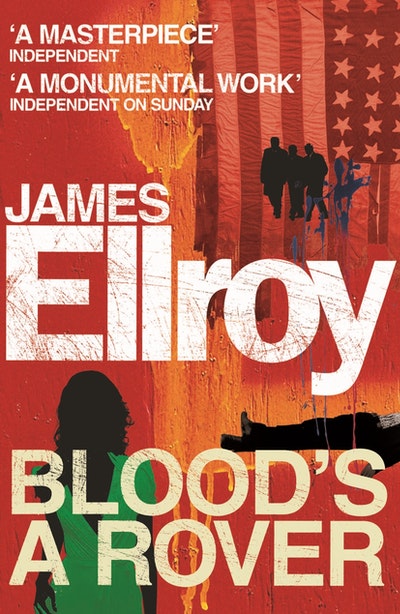 The final novel in the magisterial Underworld USA Trilogy

The final novel in the magisterial Underworld USA Trilogy. It's 1968. Bobby Kennedy and Martin Luther King are dead. The Mob, Howard Hughes and J Edgar Hoover are in a struggle for America's soul, drawing into their murderous conspiracies the damned and the soon-to-be damned.

Wayne Tedrow Jr: parricide, assassin, dope cooker, mouthpiece for all sides, loyal to none. His journey will take him deeper into the darkness. Dwight Dolly: Hoover's enforcer and hellish conspirator in terrible crimes. As Hoover's power wanes, his destiny lurches towards Richard Nixon and self-annihilation. Don Crutchfield: a kid, a nobody, a wheelman and a private detective who stumbles upon an ungodly conspiracy from which he and the country may never recover. All three men are drawn to women on the opposite side of the political and moral spectrum; all are compromised and ripe for destruction.

Blood's a Rover is an incandescent fusion of fact and fiction, and is James Ellroy's greatest masterpiece.

Praise for Blood's A Rover

[A] stunning, breathless conclusion to the Underworld USA trilogy ... There is no equivalent in contemporary fiction

[A] jaw-dropping stand-along work of uncompromising power and authenticity, and the trilogy as a whole is one of the landmarks of American fiction of the last 20 years

The classiest act around. Read it and weep - for its utter darkness and yet its stunning sweep and grace

[A] tour de force about the battle for America's soul ... is a monumental work of fiction, ... one of the most original and daring writers alive