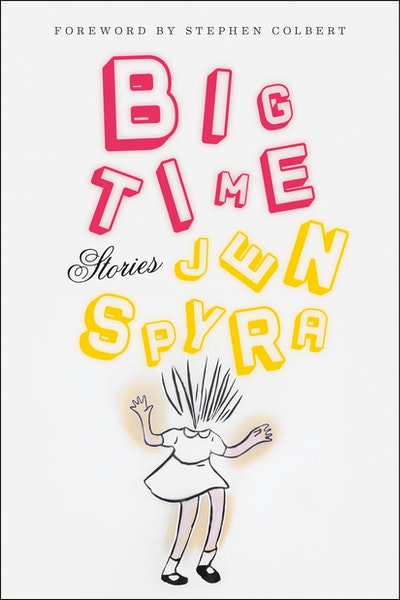 “Jen Spyra’s stories are shocking, silly, smart, and absurdly funny. Underline both those words, I don’t care how much it costs!”—Tina Fey

A bride so desperate to get in shape for her wedding that she enrolls in a new kind of workout program that promises the moon but costs more than she bargained for. A snowman who, on the wish of a child, comes to life in a decidedly less savory way than in the childhood classic. And in the title story, a time-hopping 1940s starlet tries to claw her way to the top in modern-day Hollywood, despite being ridiculously unwoke.

In this uproarious, addictive debut, Jen Spyra takes a culture that seems almost beyond parody and holds it up to a funhouse mirror, immersing the reader in a world of prehistoric influencers, woodland creatures plagued by millennial neuroses, and an all-out birthday bash determined to be the most lavish celebration of all time, by any means necessary.

Welcome, brave soul, to the world of Jen Spyra.

“When I first met Jen, I thought she was a deeply funny, normal woman. After reading her hilarious book of stories, I see she is even funnier than I thought, though exponentially less normal. It’s a pretty good trade-off.”—Mindy Kaling “Every once in a while, a new writer bursts on the scene, which makes a disgusting mess. But other times, a hilarious writer like Jen Spyra comes along with a fabulous collection of brilliantly funny, dark stories.”—Jack Handey, author of Deep Thoughts “Jen Spyra is like a hotel bed: at first glance tidy and cheerful, but shine a black light on that thing and—dear god! This book confirms what I’ve known about Jen since her first days at The Late Show: she’s delightful and disturbing, and she really makes me laugh.”—Stephen Colbert “Jen Spyra’s book, Big Time, made me laugh out loud, over and over again. After a while, the feeling became physically unpleasant. There was something invasive about it, like I was being tickled by a giant. Hilarious, confident, and brutal, Spyra is one of my favorite humor writers working today.”—Simon Rich “[Spyra] displays her audacious comedic prowess in this spicy and woke debut story collection that delivers the perfect blend of stinging satire and salacious mirth. . . . In each of these fourteen stories, Spyra draws out the humanity of the characters who are blissfully unaware that they are wading through a depressing and cruel reality topped with a layer of wokeism in tales that are ebullient, memorable, and oh so entertaining.”—Booklist (starred review)