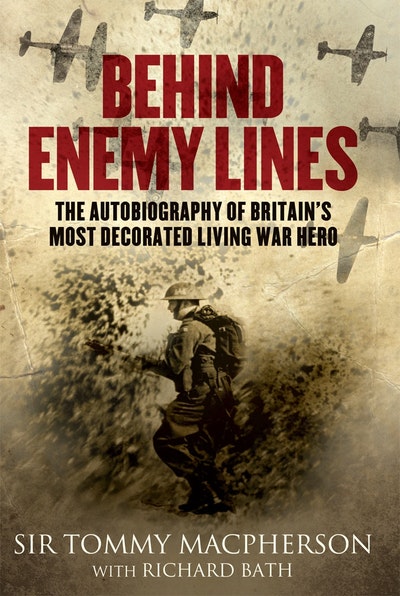 The Autobiography of Britain's Most Decorated Living War Hero

With three Military Crosses, three Croix de guerre, a Légion d’honneur and a papal knighthood for his heroics during the Second World War, Sir Tommy Macpherson is the most decorated living soldier of the British Army.

Yet for 65 years the Highlander’s story has remained untold. Few know how, aged 21, he persuaded 23,000 SS soldiers of the feared Das Reich tank column to surrender, or how Tommy almost single-handedly stopped Tito’s Yugoslavia annexing the whole of north-east Italy.

Still a schoolboy when war broke out, Tommy quickly matured into a legendary commando. Twice captured, he escaped both times, marching through hundreds of miles of German-held territory to get home.

With a dizzyingly diverse cast of characters, including Winston Churchill, Field Marshal Montgomery and Charles de Gaulle, Behind Enemy Lines is an astonishing story of how an ordinary boy came to achieve truly extraordinary feats when war came calling.

Sir Tommy Macpherson was born in Edinburgh in 1920. He now divides his time between London and Newtonmore.

Richard Bath is an award-winning journalist who edits Scottish Field magazine and writes for Scotland on Sunday on history, politics, food and sport. He lives in Edinburghwith his wife and three children.

Praise for Behind Enemy Lines

My book of the year, without question . . . reads like a combination of a Biggles adventure and Dick Barton

Jeffrey Archer in Books of the Year 2010, Daily Telegraph

One of Scotland's most courageous sons

One of Scotland's most courageous sons