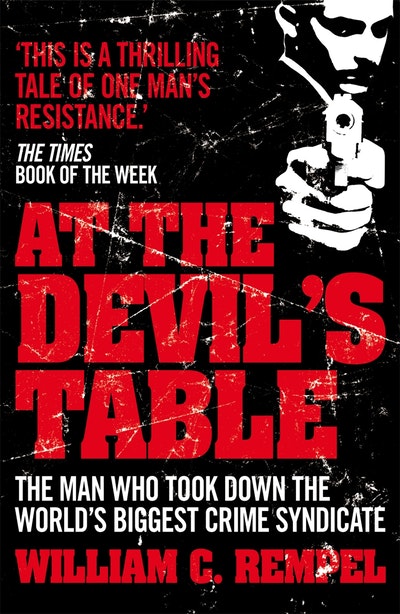 At The Devil's Table

Inside the fall of the Cali cartel. The world's biggest crime syndicate

The incredible true story of the man who risked everything to take down the world's largest drug cartel.

Jorge Salcedo was trapped. For years, he had climbed the ladder inside the Cali drug cartel, the world's most powerful crime syndicate, and risen to Head of Security. But he'd kept clean, avoided the dirty work, managed to sleep at night. Until now. He'd finally received the order he'd long dreaded, and it meant one thing: kill or be killed.

Salcedo was a family man, a man with a conscience, a father - he was no cold-blooded murderer. He was left with the last resort. It meant risking his life, his family's life, and the lives of everyone he cared for. He would have to take the whole syndicate down. It was the price to pay for salvation.

WOULD YOU RISK YOUR LIFE TO SAVE YOUR SOUL?

William Rempel spent 36 years as an investigative reporter and editor at the Los Angeles Times. While at the paper, he produced ground-breaking reports on subjects ranging from oil tanker safety to the al Qaeda threat prior to September 11, 2001. His investigative work on the corrupt regime of Ferdinand and Imelda Marcos led him to disclosure of the Marcos diaries and resulted in Delusions of a Dictator. His international stories include exclusive reports detailing secret US arms deals with Iran, tracking tons of explosives smuggled to terrorist camps in Libya, tracing embargoed nuclear technology shipped out of South Africa, and documenting the use of Ukrainian cargo planes by Colombian drug lords. His domestic stories have inspired consumer protection legislation, exposed dishonest public officials, and disclosed controversial government actions from city halls to the White House. Rempel has been recognized with numerous journalism honors, including an Overseas Press Club award, the Loeb Award, and was a finalist for the Goldsmith Prize for Investigative Reporting.

Praise for At The Devil's Table

In this powerful and riveting work of nonfiction, William Rempeldemonstrates the virtues of investigative reporting. Gaining access to the figure that could - and indeed did - spill the secrets that brought down a cartel, Rempel has an extraordinary story to tell. He not only takes the reader inside the hidden world of the drug cartels. He also provides a fascinating character study of man who must answer a simple harrowing question: Should he risk his life in order to save his soul, or should he keep a pact with the devil?

David Grann, author of THE LOST CITY OF Z

Bill Rempel has earned his reputation as one of America's finest investigative reporters the old fashioned way - by getting people to tell him explosive stories they won't talk about with anyone else. At The Devil's Table brings Rempel's skills to the fore as never before,revealing the graphic details of Colombia's bloody drug wars from the ultimate insider. By the end, you realize that the biggest mystery is how Jorge Salcedo stayed alive long enough to tell Rempel about his amazing life.?

James Risen, author of State of War: The Secret History of the CIA and the Bush Administration

Columbia has been devoured by drug lords: this is a thrilling tale of one man's resistance.

The Times, Book of the Week