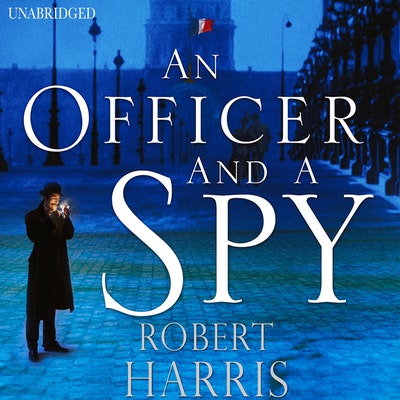 An Officer and a Spy

They lied to protect their country. He told the truth to save it. A gripping historical thriller from the bestselling author of FATHERLAND.

They lied to protect their country. He told the truth to save it. A gripping historical thriller from the bestselling author of FATHERLAND.

January 1895. On a freezing morning in the heart of Paris, an army officer, Georges Picquart, witnesses a convicted spy, Captain Alfred Dreyfus, being publicly humiliated in front of twenty thousand spectators baying ‘Death to the Jew!’

The officer is rewarded with promotion: Picquart is made the French army’s youngest colonel and put in command of ‘the Statistical Section’ – the shadowy intelligence unit that tracked down Dreyfus.

The spy, meanwhile, is given a punishment of medieval cruelty: Dreyfus is shipped off to a lifetime of solitary confinement on Devil’s Island – unable to speak to anyone, not even his guards, his case seems closed forever.

But gradually Picquart comes to believe there is something rotten at the heart of the Statistical Section. When he discovers another German spy operating on French soil, his superiors are oddly reluctant to pursue it. Despite official warnings, Picquart persists, and soon the officer and the spy are in the same predicament…

Narrated by Picquart, An Officer and a Spy is a compelling recreation of a scandal that became the most famous miscarriage of justice in history. Compelling, too, are the echoes for our modern world: an intelligence agency gone rogue, justice corrupted in the name of national security, a newspaper witch-hunt of a persecuted minority, and the age-old instinct of those in power to cover-up their crimes.

Praise for An Officer and a Spy

The fact that this novel is seriously riveting is a testament to Robert Harris's storytelling power; he conjures knuckle-blanching suspense from a very well-known piece of history.

BOOKS OF THE YEAR, The Times

Harris’ retelling of the Dreyfus case is as taut and exciting as anything by Forsyth or Follet.

BOOKS OF THE YEAR, Guardian

Menace and suspense twist tight in a narrative of tremendous tension.

BOOKS OF THE YEAR, Sunday Times

Superb . . . Harris demonstrates his unique ability to recreate historical events and turn them into spellbinding thriller . . . Written with scalpel-like precision and the elegance we expect of Harris, there is a passion here that justifies calling it a masterpiece.

BOOKS OF THE YEAR, Daily Mail

A brilliant retelling of a scandal that became one of the most famous miscarriages of justice . . . the most gripping book I've read this year.

BOOKS OF THE YEAR, Mail on Sunday

A master storyteller at the top of his game

A compelling tale of power, cover-ups and idealism.

Many readers prize him as our supreme exponent of the “literary” thriller. His novels are not difficult – they are whizzing page-turners… They also combine masterly suspense and mystery with historical insight and political shrewdness. His latest novel is no exception: it is a cracking read from start to finish… It offers a bravura display of Harris’s fictional skills. The first is sureness of historical touch. In both general and specific terms the period comes alive… There is no need to wait for the film: it can scarcely be more exciting than the book.

Harris is committed to the belief that you can get at a truth as a novelist that you can’t as an historian… and he does give us the look, sensations, sounds and smells as no historian could… it is informative, accomplished and highly enjoyable

The Dreyfus Affair… has now been brilliantly retold by Robert Harris… This is a book about spies and their deceits and the unreasonable demands that are made of them by their hard-to-please political governors. It is 1895 with a strong undercurrent of 2003… The real subject then is espionage and the broader, mutually manipulative relationship between the intelligence “community” and the political class… Along the way, Harris gives us plenty of espionage tradecraft. The eavesdropping, the handwriting analysis, the forgery.

The story is a gift to any novelist fascinated by the murkier aspects of politics – and Robert Harris takes full advantage, serving up a perfect read for those who like their literary thrills to come with some immaculately researched history… the tension is cranked up further with every agonising twist.

Robert Harris who pulls out a surprise with each new novel, has turned to this political scandal which “came to obsess France and ultimately the entire world”… None of the characters is entirely fictional, promises the author’s note. Therein lies the only difficulty with this taut thriller, as the reader wonders how much is history and how much is Harris.

The story charges along at full throttle, in a vibrant account adorned with masterly detail

Immaculately researched but delivered with such a deft touch that it never feels like a history lesson…superlative.

Gripping from beginning to end

An Officer and a Spy is written in elegant prose reminiscent of the 19th-century historical novel, but its form is a hybrid of the contemporary thriller, the spy novel and the courtroom drama. It is persuasive and engaging on all of these levels, while providing a unique and fresh reading of the Dreyfus Affair. It’s also timely, serving as a warning against religious bigotry and groupthink.

People who have read my fiction reviews in this paper will be familiar with my assertion that the glory of imaginative literature rests in its ability to make the reader think and feel at the same time. This marvellous novel does just that. It may well be the best book Robert Harris has yet written - and that’s saying something.

Harris’s gift for breathing life into historical characters is on full display in this brilliant fictionalisation of L’affair Dreyfus.

It is tantalising to speculate on what liberties an author has taken when fictionalising a true story but the facts of the Dreyfus Affair are so incredible that Harris has no need to embellish. He fashions an enthralling frame and lets the astonishing tale unfold.

The choice of narrator is sure-footed. Georges Picquart makes a fascinatingly ambiguous figure around whom to anchor this tale of moral absolutes.

Robert Harris is the master of the political thriller and his latest finds him in fine form.

Both gripping thriller and Buchanesque adventure: its revelations impeccably paced and its original material used to poignant effect… An Officer and a Spy is carried throughout by the peerless characterisation of Picquart… But most of all it is the honest, implacable soldier’s dawning realisation that the institutions in which he has placed his faith are appallingly corrupt that has the most tenacious hold on the reader. It still has power to shock – and it leaves us in no doubt as to an old story’s continuing resonance.

An event that obsessed France and the world is retold here, in forensic detail, with great clarity and humanity.

I have just had a preview copy of Robert Harris’s new novel An Officer and a Spy, a thriller based on the Dreyfus case. Like John le Carré, Harris is interested in rogue intelligence, corrupted by politics. Unlike le Carré he does not lay it on too thick. The story of Dreyfus, a Jewish army officer convicted in France for spying for the Germans then exonerated, is one of history’s great political dramas. Harris backs the power of argument and reason. Politicians reportedly took Charles Moore’s Thatcher biography with them on holiday. Harris’s thriller would be perfect for the trip home.’