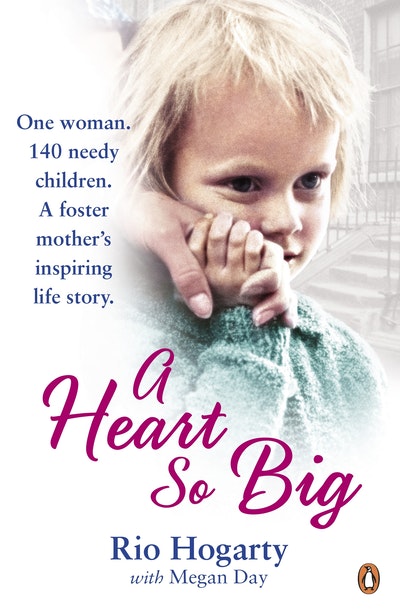 A Heart So Big

When she was still a child in the 1940s Rio Hogarty rescued an unhappy school mate. Rio decided that her friend must get away from her violent father and that the solution was simple - Rio's own family must open their home and their hearts to the fearful young girl and help to sort out her problems.

Nearly seven decades on and Rio is still at it - opening her home and her heart to children in need. She has fostered more than 140 children and in 2010, in an award created specially for her, she was named Mother of the Year at Ireland's annual People of the Year Awards.

However, Rio is no saintly madonna. Along the way she stood up to armed robbers, hijacked a taxi to drive herself to the hospital when in the throes of labour, caroused in New York bars with stars of the folk music scene, was the first Irish woman to get a HGV licence, smuggled contraband ... When she had to, she cut corners to get what she wanted. And she also surrendered to alcoholism and nearly lost it all. But ultimately her courage, feistiness and zest for life triumphed.

A Heart So Big is the story of a woman who just couldn't turn her back on a child who needed a home. It is also the story of the children whose lives she affected so deeply and a heart-breaking reminder of the price children pay for the failures of adults. But most of all, it is a moving, vivid, uplifting and searingly honest account of an amazing life lived to the full.