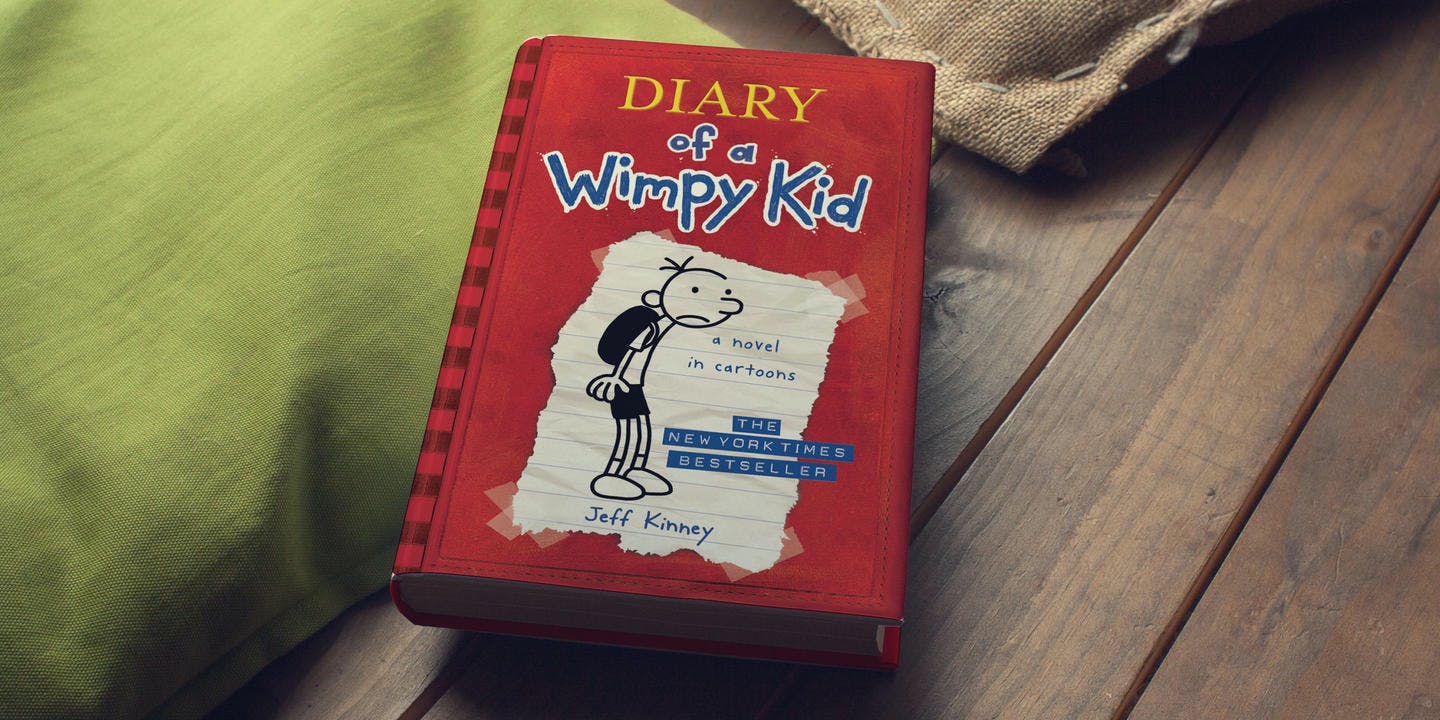 Discover Jeff Kinney’s story behind Diary of a Wimpy Kid.

He’s the kid who made being wimpy ‘cool’. A wise-cracking, scrawny high school student with an over-sized backpack and a talent for sarcasm that has children rolling about with laughter and, in many instances, reading a book for the first time ever with a genuine sense of joy. His name is Greg Heffley and he’s the clueless protagonist of Jeff Kinney’s wildly popular series, Diary of a Wimpy Kid.

Since the first book, with its neat, handwritten font and cartoon stick-figure drawings was released in 2007, it’s become one of the coolest and most popular children’s series in the world.

Kinney, the pleasant faced author and illustrator named one of Time magazine’s 100 Most Influential People in the World in 2009, freely admits that aspects of Greg Heffley and his uncertain navigation of school life – dealing with everything from girls to popularity and bullying – were inspired by his own childhood. ‘I was an average kid, but I definitely had my wimpy moments,’ Kinney has said. ‘I used to spend my swim team practices down by the creek, collecting tadpoles, until I got caught by my mom.’

Rejection was a major building block in the creation of the Wimpy Kid series. Kinney, wanting to get involved in the student newspaper at college, volunteered to write a crossword puzzle. ‘They laughed at me, openly laughed at me,’ he told The Washington Post newspaper. ‘To save face, I said, “actually, I want to do a cartoon”.’

After graduating in 1993, Kinney began sending batches of his cartoons out to newspapers only to get ‘these horrible anonymous rejection letters’. He almost gave up but instead started keeping a journal, filling it with words and pictures. ‘I decided to try writing a fictional story in that format and that’s when the idea for Diary of a Wimpy Kid was born.’ But before it became a book destined to be read and adored by children everywhere, Kinney published the story of Wimpy online in daily instalments. Within a year it was getting something like 70,000 visitors a day.

Buoyed by its online popularity, Kinney pulled out his Wimpy Kid sample and showed it around at a comic conference. ‘It was like a vampire seeing garlic or something,’ he says. As Kinney was leaving, he decided to pitch Wimpy ‘one last time’ to editor Charles Kochman, and it was Kochman’s enthusiastic response – ‘I just absolutely fell in love with it,’ he says – that eventually led to Kinney securing a publishing deal.

Not that it was the one Kinney had been expecting, for all along he’d conceived Wimpy as a book for adults who could look back and savour the awkwardness and embarrassments of their own childhood. At first, Kinney was upset. ‘I felt like it was going to lose its edge. Had I been thinking that I was writing a kids’ book all that time, I would have written a much different book.’

Just as well he didn’t – the Wimpy series has proved universally popular, loved as much by those who are passionate readers as by children normally reluctant to pick up a book.

Not surprisingly, Greg, the unlikely hero – sometimes funny, sometimes embarrassing – has created some unease among a few parents for his laziness and ethical lapses. ‘Greg is self-centred and can be kind of clueless,’ agreed Kinney in an interview. ‘I don’t think Greg is a bad kid, necessarily; but like all of us he has his faults. Hopefully, readers will understand that Greg’s imperfections are what make him funny… I think that stories with characters who always do the right thing are a little boring. I wanted to create a character who was more realistic.’

US paediatrician, Dr Lawrence Rosen, told the New York Times that the ‘power’ of the book is ‘about the wimpy kid, a regular kid with regular problems, just dealing with what life brings him.’

In the same article, Dr Joshua Sparrow, a US child and adolescent psychiatrist said that Wimpy ‘Really captures the struggle of a child that age trying to figure what it means to be a person.  I think it can help parents tune into what kids know and how they think.’

For Kinney, an online game developer and designer who lives in Massachusetts with his second wife, Julie, and their two sons, Will and Grant, Wimpy’s success has exceeded his wildest dreams. ‘I didn’t even think I had a chance of getting published. I thought the book was too strange. Everything past the point of publication has been surreal for me… I feel like I’m on The Truman Show.’