Take your book club on the race of a lifetime around Australia with Peter Carey’s A Long Way From Home.

Set in 1950s Australia amid the consequences of the age of empires, this brilliantly vivid and lively novel reminds us how Europeans took possession of a timeless culture – the high purpose they invented and the crimes they committed along the way. Here are some discussion points to jump-start the conversation at your next reading group meet-up. 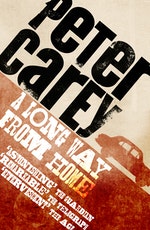 Australia’s master novelist takes us on the race of a lifetime.