Tom Simpson, born in 1937, was an English road racing cyclist whose successful career was cut tragically short by his death on the slopes of Mont Ventoux during the 1967 Tour de France. Simpson became the first Briton to wear the yellow jersey as leader of the 1962 Tour de France, finishing sixth overall. Then in 1965 he won the coveted accolade of the BBC Sports Personality of the Year Award, the only cyclist to have won this award until Chris Hoy in 2008. 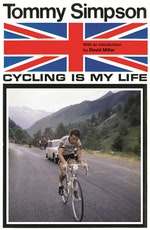 Cycling is My Life Tommy Simpson

The autobiography of the greatest British cyclist written the year before he died tragically on the Tour de France - with an introduction by cyclist David Millar.

Be the first to find out about Tommy Simpson.