Book for an event
theresagattung.com

Theresa Gattung wrote the bestselling memoir Bird on a Wire: The inside story from a straight-talking CEO about her time as Chief Executive Officer of Telecom and the road that took her to becoming New Zealand’s highest-profile businesswoman. Several times she featured Fortune’s list of The World’s 50 Most Powerful Businesswomen, and in 2006 was number 49 on the Forbes list of The World’s 100 Most Powerful Women. As well as an inspirational story, Bird on a Wire explores new ways of leadership and running businesses. Gattung was appointed CEO of Telecom in 1999 at the age of 37, and led the company through massive change for seven years — including the struggle with an Australian telco acquisition, shareholder pressure, antagonism from the government, controversy over pricing, battles with Telecom’s telco competitors, and changing technology. See www.theresagattung.com.
She talks candidly of the personal toll of those tough years at the top, and about how she has rebuilt her life. A member of Global Women, an active philanthropist and busy keynote speaker, she lives in Wellington. She chaired the Advisory Group, NZ Country of Honour, Frankfurt Book Fair 2012, and chairs AAA Australia, Telco Technology Services and the Wellington SPCA. From 2008 to 2011 she was Chair of Wool Partners International. Gattung has a Bachelor of Management Studies (Honours) in economics and marketing from the University of Waikato, and a Bachelor of Laws from Victoria University of Wellington. Gattung held senior marketing roles at TVNZ, National Mutual, the Bank of New Zealand and Telecom before taking over as Telecom CEO from Roderick Dean. 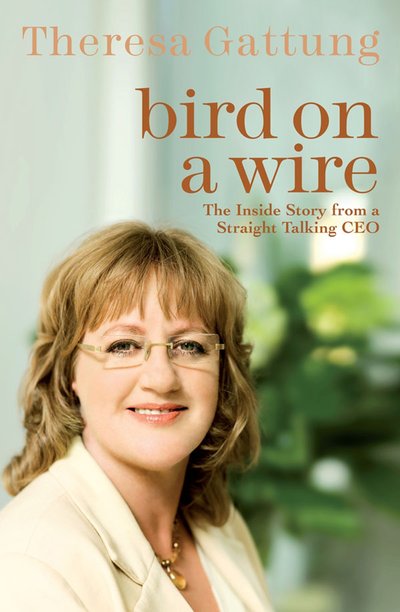 Bird On a Wire
Theresa Gattung