Raised in Melbourne, Suzi Petkovski spent way too many Saturdays at Victoria Park and was inconsolable when Peter McKenna was replaced as co-host of Hey Hey It's Saturday by a pink ostrich. A political science graduate from the University of Melbourne, she jumped into sports journalism, only to discover that communist political theory was a snap compared to the machinations of Australian football. A writer with Inside Sport since 1995, she has inflicted interviews on numerous unsuspecting footy stars, including Stephen Silvagni, Saverio and Anthony Rocca, Jason Akermanis, Simon Black, Nathan Brown and Paul Van Der Haar. As if the Collywobbles years weren't suffering enough, she is now a regular at Richmond games, masochistically drawn to premiership droughts (and outvoted by the Tigers supporters in her family).

Drop Punts and Torpedoes is Suzi’s first football book. She was co-author of Too Good: The Scott Draper Story (2007), also published by Random House. 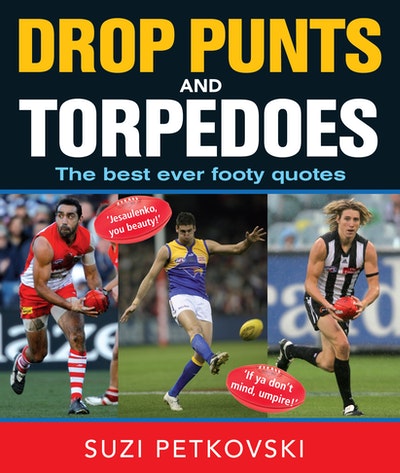