Stephen Roche was born in Dundrum, Dublin, Ireland. As a road racing cyclist, over the course of 13 years, he recorded 58 professional career wins, including the Tour de France, the Giro d’Italia and the World Road Racing Championship, all of which he won in 1987. Since retiring Stephen has set up and built Stephen Roche Cycling Holidays and Training Camps, based in Majorca and worked as a commentator for Eurosport. Born to Ride is his first full autobiography. 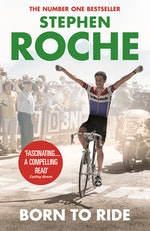 The first full autobiography of Irish cycling legend Stephen Roche, who in 1987 defied all odds to win cycling's 'triple crown'

Be the first to find out about Stephen Roche.