Roger Swainston is one of the foremost marine-life artists in the world, with more than 25 years of artistic and scientific endeavour. His paintings are renowned around the world for their accuracy and vibrancy.

After training as a zoologist at the University of Western Australia, Swainston spent several years in the Department of Ichthyology at the Western Australian Museum, working on the taxonomy of fishes and the re-cataloguing of the museum's extensive collection of specimens. In the ensuing years he has taken part in scientific surveys of a wide range of environments: from the deep waters off the North West Shelf to the inshore waters of the southern coast of Australia and the coral reefs of Papua New Guinea. As expedition artist with a team of international scientists, he spent two months surveying the fish life of the remote Clipperton Atoll in the far eastern Pacific. Later he worked with the Natural History Museum of Paris and Pro-Natura International, portraying the biodiversity of the marine environments and freshwater streams of Vanuatu. More recently he has accompanied scientists surveying the biodiversity of northern Mozambique and Madagascar.

Swainston has dived, snorkelled and painted fishes right around the coast of Australia and in many other locations worldwide, including the Mediterranean, Red Sea, Caribbean, and areas throughout the Indian and Pacific oceans. For many years he has closely monitored a number of sites on Ningaloo Reef, off Western Australia, spending countless hours under water drawing the reefs and observing and photographing fishes to produce panoramic scenes of the environments. He has also worked extensively with professional fishers around Australia, studying their catches and fishing methods.

His work has been included in many well known field guides to fishes, including Sea Fishes of Southern Australia, Marine Fishes of North western Australia, Reef Fishes of New Guinea, Freshwater Fishes of New Guinea and Fishes of the Eastern Pacific. He has also illustrated major scientific works, such as Sharks and Rays of Australia and guides to the Emperors and Snappers of the world, as well as contributing illustrations to numerous other publications. His artworks have been used by numerous scientific institutions, including the Smithsonian Institute, the Food and Agriculture Organization of the United Nations (FAO), Australia's Commonwealth Scientific and Industrial Research Organisation (CSIRO), and the Natural History Museum of Paris, as well as many government environmental and fisheries agencies both in Australia and abroad.

Swainston has held solo exhibitions in Sydney and Fremantle, and in France. His paintings are held by private collectors around the world, and by institutions including the Ministry of the Environment and the Musée des Arts et Traditions Populaire in France, the Oceanographic Institute of Monaco, the National Archives of Australia, and the Western Australian Museum. Several documentaries about his underwater work in the Red Sea and on Ningaloo Reef have been widely broadcast internationally.

Roger Swainston presently lives and works in Fremantle, Western Australia, with his partner Catherine and their three children. 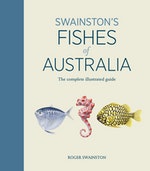 A fascinating overview of the extraordinary diversity of Australia's marine and freshwater fishes, illustrated with Roger Swainston's breathtaking artwork

Be the first to find out about Roger Swainston.