A prolific writer and broadcaster, PHIL GIFFORD has reported on every Rugby World Cup since 1987, and will be in Britain to cover the 2015 tournament. He has won nine New Zealand radio awards, has twice been judged New Zealand sportswriter of the year, and three times New Zealand sports columnist of the year. He has also won two Dulux national print awards for news reporting, in 1976 (on the Captaine Bouganville shipwreck) and 1981 (on the Springbok tour).

In 1973, Phil invented the satirical rugby character Loosehead Len, and wrote his columns for 32 years. He continues to write a column in the Sunday Star-Times, and in 2014 was a member of the Fairfax Media team at the Commonwealth Games in Glasgow. In 2010, Phil was honoured with the SPARC lifetime achievement award for services to sports journalism.

Inside the Cup is Phil's 25th book, biographies of Joe Stanley, Grizz Wylie, Mike Brewer, Peter Fatialofa and Todd Blackadder among his previous works. His own memoir, Loose among the Legends, was named one of the biographies of the year in the New Zealand Listener's 100 best books of 2014.

Phil lives in Auckland, with his wife Jan. 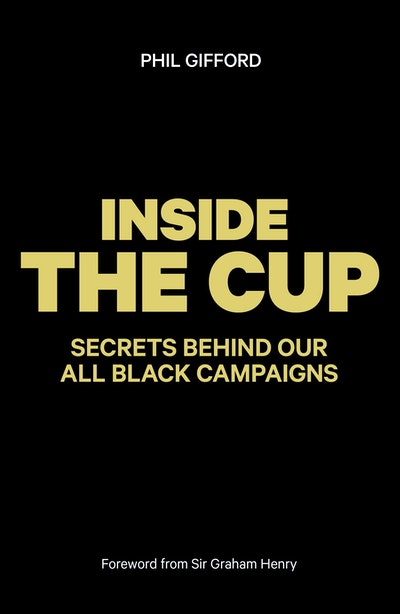 Inside the changing sheds, the gyms, the hotels and on the field with the All Blacks at each Rugby World Cup – a tournament that grips the nation.