Martin Wolf is Chief Economics Commentator at the Financial Times. He has been visiting professor at Oxford and Nottingham universities, a fellow of the World Economic Forum in Davos, and a member of the UK's Vickers Commission on Banking, which reported in 2011. His books include Why Globalization Works and Fixing Global Finance. In 2000, he was awarded the CBE for services to financial journalism, and in 2012 he received the Ischia International Journalism Award. 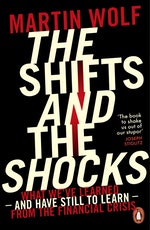 The Shifts and the Shocks: What we've learned - and have still to learn - from the financial crisis Martin Wolf

The Shifts and the Shocks is not another detailed history of the crisis, but the most persuasive and complete account yet published of what the crisis should teach us us about modern economies and economics.

Be the first to find out about Martin Wolf.