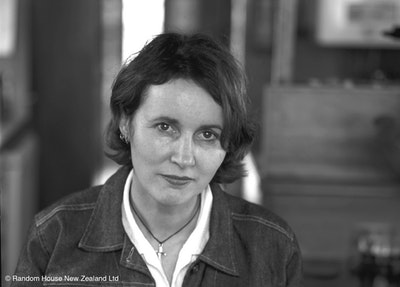 Karyn Hay has been connected with music and broadcasting for many years, hosting Radio with Pictures in the 1980s, hosting the late night music show Coca-Cola TVFM, directing and producing Music Nation and music videos in the 1990s, and in the 2000s co-hosting a Channel Z radio show, working as general manager of Channel Z and currently a regular night-time host on Radio Live. Emerald Budgies won the 2001 Hubert Church Best First Book Award in the Montana Book Awards, and has been described by Kate Camp as ‘raw, thoughtful and very funny’. In 2004 she was awarded the Frank Sargeson Fellowship.

Reviewers of Emerald Budgies have noted the edgy combination of the gritty and negative with humour, as, for example, Denis Welch in the New Zealand Listener: ‘A relentlessly bleak — if extremely funny — vision of modern life with no redemption whatsoever for anyone anywhere . . . There are times when Emerald Budgies makes Trainspotting look like Rebecca of Sunnybrook Farm.’
Emily Perkins encapsulated its uneasy strength and appeal: ‘Great energy — so much chaos — and I laughed out loud a lot too. This is a strange way to describe it but Emerald Budgies is really charming.’ 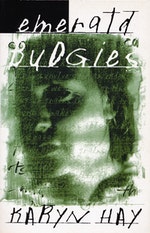 A darkly comic novel of disintegration, betrayal and revenge.

Be the first to find out about Karyn Hay.