Tony Ross served in the RAF between 1940 and 1946, reaching the rank of wing commander and being awarded the DFC. After the war, he enjoyed a long career in marketing, before retiring in 1990. He married Joan Charles in 1946 and they remained married until Joan's death in 2006. Tony lives in France and will celebrate his 90th birthday in 2011. 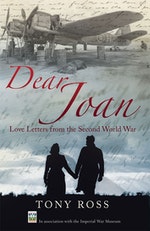 Be the first to find out about Joan Charles.