In February 2011, Jill’s book The Second Half of Your Life was published in the UK by Random House/Ebury (9th printing). The book is written especially written for women over 50, using the changes around menopause as the trigger to get to the best years of your life. Although based on the science of hormones, it is inspirational and provides prescriptive advice to encourage today’s ageing population that they have the power to create the life they want to live. The book has been heralded as "one of the most important women’s books for a decade”, “groundbreaking”, “inspirational” and “the manual for women in the second half of their life.”

After publication, Jill set out to expand upon the ideas in her book and to make her words literally come to life. In May 2011, The Second Half Foundation (SHF) was approved by the UK Charity Commission (Reg 1141988) with the purpose of creating community hubs to tackle social isolation and create template for positive aging and wellbeing that accurately reflects ageing and the problems our growing old population face in 21st century. The first Second Half Centre (SHC) opened its doors on October 29th 2012. In just over two years, the SHC has over 1500 members, 70 hours of activities weekly, engages 180 volunteers, and 400 members attending classes and workshops each week.

Using the five components of successful ageing, as detailed in Jill’s book, the Second Half Foundation aims to tackle isolation and loneliness for any person over the age of 50. Providing activities, teaching new skills and hobbies, and following the “Five a Day” (which has even now been adopted by the NHS), those in the second half of their lives are encouraged to discover why this is their best half. In December 2013, the SHF announced an agreement with the charity Open Age to take over the running and management of the SHC effective April 1, 2014. The Second Half Foundation intends to template the model they created in St Charles throughout London and the United Kingdom.

The Second Half of Your Life Foundation was selected by the Mayor of Kensington and Chelsea as her charity for 2011/2012. Jill Shaw Ruddock is the winner of the 2011 Veuve Clicquot “Woman of the Year Tribute”, the 2012 Jewish Care Woman of Distinction Award, and the 2012 Common Good Award from Bowdoin College. Jill was named one of Kensington’s 25 Most Inspirational People in the June 2012 issue of The Hill magazine and listed in Libertine magazine’s Top 100 Dynamic Women in 2015.

Raised in Baltimore, Maryland and educated in its inner-city state schools, Jill Shaw Ruddock went on to get her degree in Politics from Bowdoin College in Brunswick Maine (1977). She began a career in advertising working for Young and Rubicam in New York City, and then moved to publishing, working for Inc. magazine and The Atlantic Monthly. In 1983, Jill moved to London to co-head the consulting firm of The Government Research Corporation. In 1985, she joined the US investment bank Alex Brown & Sons and became the Managing Director and Head of their London office in 1994, managing their $60 million dollar European Equity business and supervising the mergers with Bankers Trust (1997) and Deutsche Bank (1999). After retiring from finance in 1999, she joined the main board of The Donmar Warehouse (2002) and The Mousetrap Theatre Projects (2005) chairing their fundraising efforts (work she continues to do). In 1999, she retired from finance and became In addition to her theater involvement, a board member of Bowdoin College Museum of Art. She was a trustee of Bowdoin College for ten years. She is married to Sir Paul Ruddock and has two daughters, Sophie and Isabella. 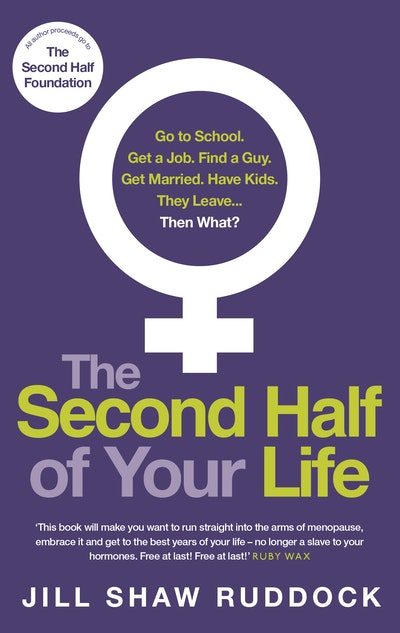 The Second Half of Your Life
Jill Shaw Ruddock

NEW EDITION - COMPLETELY REVISED AND UPDATED WITH NEW CHAPTERS ADDED. A positive, life-affirming book for women over 50 that encourages them to make the most of their post-menopausal years