Jay Ingram is the distinguished science broadcaster and writer who has won many awards for raising public awareness of science, including the Sandford Fleming Medal and a Michael Smith Award for Science Promotion. He was co-host of Discovery Channel’s science show, Daily Planet, for 16 years and his 13 books have been translated into 14 languages. In 2015 he was the recipient of the Walter C Alvarez Award for medical writing. www.Jayingram.ca 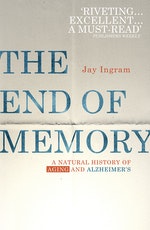 The End of Memory Jay Ingram

An authoritative and highly readable exploration into the plague of the 21st Century: Alzheimer's.

Be the first to find out about Jay Ingram.