J. D. Barker was born and raised in Illinois and then moved to Florida where he gained a degree in business from the Art Institute of Fort Lauderdale. As well as writing for music and pop culture magazines, including 25th Parallel, Seventeen and Teenbeat, he has been a ghost writer and book doctor. His acclaimed debut novel, Forsaken, was nominated for the Bram Stoker Award, while his second, The Fourth Monkey, has been an international success story. He lives with his family in Pennsylvania. 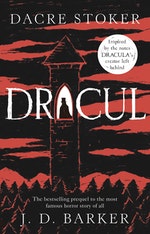 Written by Bram Stoker's great grand-nephew and a bestselling dark thriller writer, and authorized by the Stoker Estate, Dracul is the prequel to perhaps the most celebrated and terrifying horror story of them all . . .

Be the first to find out about J. D. Barker.