Danielle Allen is the Director of the Edmond J. Safra Center for Ethics at Harvard University, professor in Harvard’s Department of Government and Graduate School of Education, Chair of the Mellon Foundation Board, past Chair of the Pulitzer Prize Board, and member of the American Academy of Arts and Sciences.

Allen is a political theorist who has published broadly in democratic theory, political sociology, and the history of political thought and is widely known for her work on justice and citizenship in both ancient Athens and modern America.

She is a frequent public lecturer and regular guest on public radio to discuss issues of citizenship, as well as an occasional contributor on similar subjects to the Washington Post, Boston Review, Democracy, Cabinet, and The Nation. 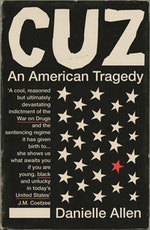 'Unbearably moving,' Chimamanda Ngozi Adichie The story of a young man’s coming of age, a tender tribute to a life lost, and a devastating analysis of a broken system.

Be the first to find out about Danielle Allen.