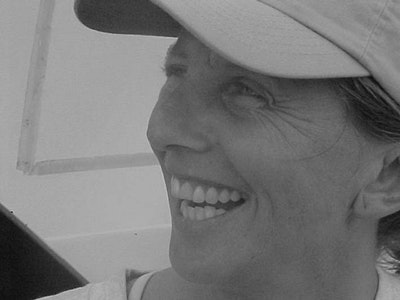 Adrienne Cahalan qualified as a lawyer but no longer practices as her career is now in offshore and inshore navigation for round the world racing and weather routing. Adrienne is a director on the Board of Yachting Australia. In 2003, she completed a Master of Science in Applied Meteorology at the University of Reading, UK and based her thesis on southern hemisphere meteorology.
Adrienne learnt to sail as a teenager and has been involved in almost all forms of competitive skiff and ocean racing. She has sailed in 14 Sydney Hobart Races, a Kenwood Cup, 10 World Championships in dinghies and yachts, 3 Admirals Cup campaigns, 3 Fastnets, 8 Transatlantics, been involved in 3 Whitbread /Volvo campaigns, and several circumnavigation projects including 2 Jules Verne/RTW attempts (the last one lead by Steve Fossett where they successfully smashed the record).
Adrienne currently holds 5 world sailing speed records and is the Australian Yachtswoman of the Year. She is the only navigator to have broken, in the space of 2 years, the 24 hour record, the round the world record, the cross channel record, and won the prestigious Newport-Bermuda Race and the Admirals Cup in the same period.