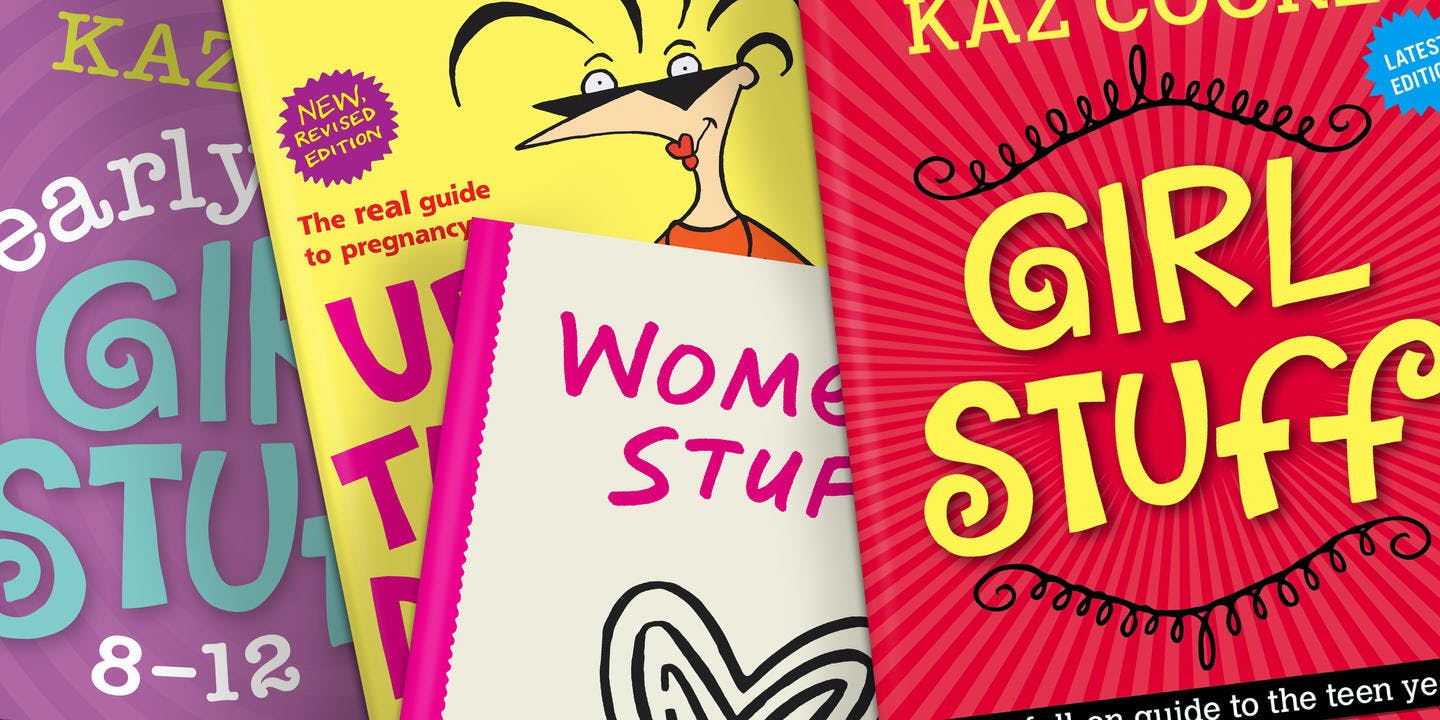 Get to know Kaz Cooke: go-to advisor for women and girls.

Kaz Cooke’s bestselling books include Girl Stuff, Women’s Stuff, Up the Duff, Kidwrangling, and a series of ebooks on women’s health issues from sex to mental health and menopause. Kaz’s funny, friendly style is backed by research and professional consultants: she’s been a best friend to at least two generations. And though her children’s book The Terrible Underpants is not quite autobiographical, here she answers our questions candidly to reveal the woman behind the books.

Are women better off today, more equal, better informed than 50 years ago or are there some age-old problems that have never gone away?
Both! Many women are better off – all of us now are more fragrant and comfortable than even the Queen of England was in the 1500s and there are much better treatments for mental and physical health available now. But we’re still dealing with rampant discrimination against girls and women, the threatening of their lives, sexual enslavement and in some countries, refusal to educate them. Meanwhile we still are pressured to care more about our hair style than our vote. Women still do most of the housework, worrying, and the emotional and physical work of the home.

In Women’s Stuff you wrote that women have never hated the way they look more than they do today – any theories as to why?
I think the rise of commercialism and advertising is a big part of it. The prevailing culture tells girls they are too fat when they are still in kindergarten – they see it on TV, they watch their mums talking about it and criticising themselves. The bizarre domination of porn-related culture has also ‘told’ women they need to be ‘hot’ and look sexually available and primped (hence the Brazilian craze) and now cosmetic procedures and surgery are seen as an ordinary option for some. I think women are being shouted at all the time that they’re not good enough the way they are.

Have you ever struggled with your shape or looks?
Oh good lord, some mornings I look in the mirror and wonder if I should start waxing the ends of my moustache into jaunty curls. I still draw my eyes in and whack on some lippy but I’ve usually eaten or smudged it by 11am. If I tried to hold all my bulgy bits in with ‘shapewear’ I’d be wearing a wetsuit. Like most women I am entirely aware that I will never be mistaken for a young Sophia Loren. But you know, I’d rather worry about not laughing more than laugh lines. I’d rather be comfortable and stridey than wear hurty high heels. I’d rather get on with things and be busy than look long enough in the mirror to find the next wrinkle coming. I do want to be fitter and that’s my next ‘project’.

What is the single best piece of advice you could give to a woman nursing a breaking heart?
Be careful and kind to yourself while you heal and later, remember what the relationship and the break-up have taught you.

What would you say to a woman at breaking point, juggling her desire to stay at home and look after young children and her desire to have a career and use her brain outside the home?
You can do both. Just not always at exactly the same time. Enlist as much support as you can both at home and with the kids, and at work. Don’t feel bad about not being superwoman. You can’t be good at everything all the time so give yourself permission to take some time out from one side of your life for the other.

Do you ever ignore your own sage advice and stuff up?
All The Time. Remember, I don’t write advice books because I’m brilliant. I do it because I need the advice. My talent is knowing how to find out things (all that journalism training!)

You’ve been described as being like a straight-talking Aunt, others see you more as a modern-day guru – which is most accurate?
I am a nosy-parker who likes toast and doesn’t mind ringing up more than 100 Australian and global experts and convincing them to help me write a book.

What has been the most difficult stage in life for you as a woman?
The teens were really hard because I had a lot of pimples and apple-green bedroom walls. My 20s probably the hardest because although I was earning money and didn’t have to wear old ladies pants from the op shop any more, I didn’t realise that I could influence and choose things that happened in my life. I was too busy responding to what turned up in front of me and because I did so many stupid things; drinking like a Russian mobster, smoking like a damp pile of leaves on a campfire and sleeping with reporters. In my 30s I settled down and started a family. In my 40s I did the juggle. I’d say it’s a tossup between the first two years of motherhood, and my 20s.

Whom do you rely upon for advice now and when you were younger?
Now, it’s my friends, and any of the more than 200 lovely experts I consult for my books. I am afraid that when I was younger I probably would have taken advice from any old bonkers baggage who offered it, because I didn’t know anything.

And dislikes?
Capers (by which I mean those strange berry things, not amusing adventures); maths and women who look you up and down dismissively when they first see you. I’m looking at you, snooty boutique sales assistants called Anthea).