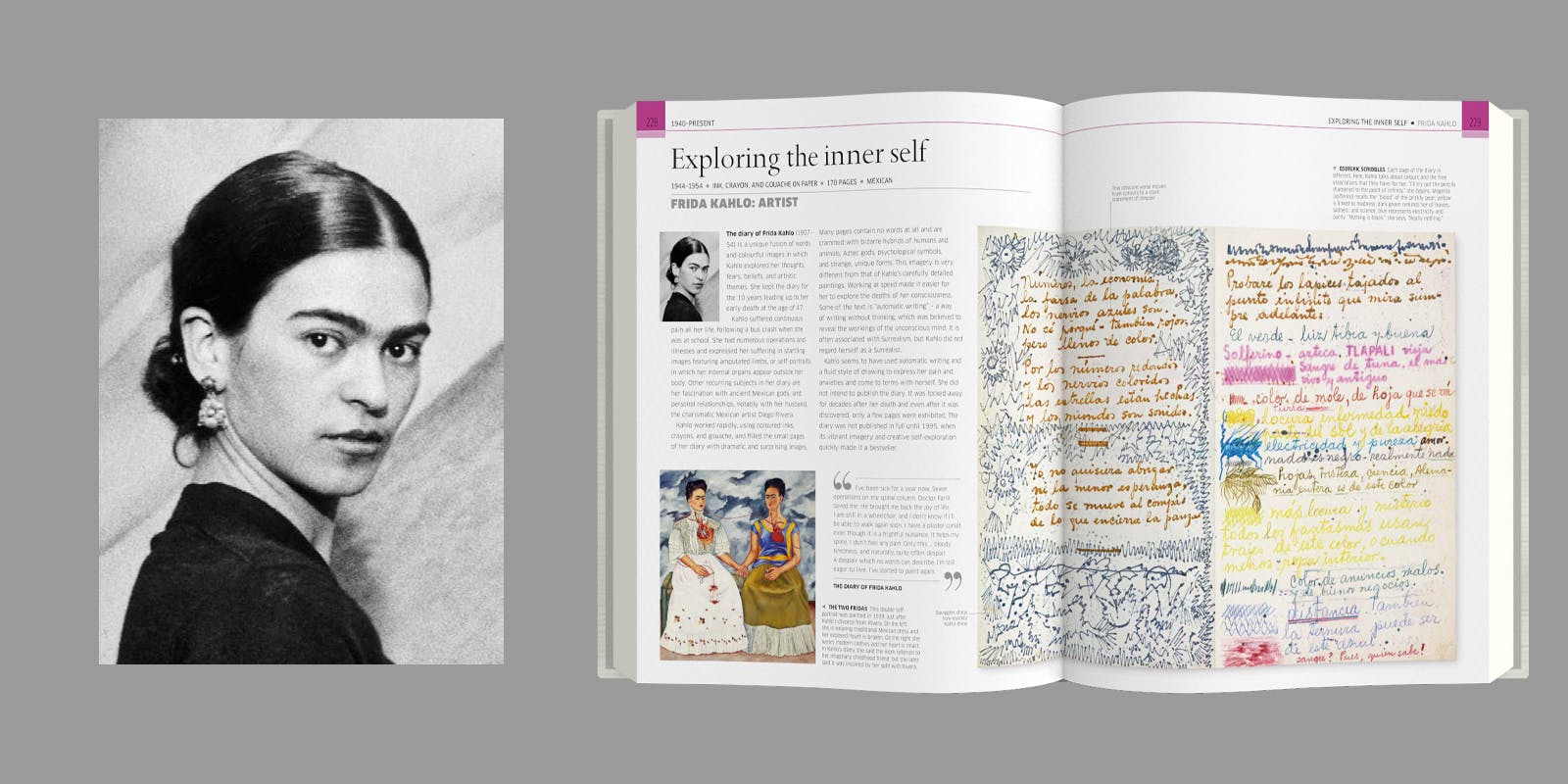 The diary of Frida Kahlo (1907–54) is a unique fusion of words and colourful images in which Kahlo explored her thoughts, fears, beliefs, and artistic themes. She kept the diary for the 10 years leading up to her early death at the age of 47. Kahlo suffered continuous pain all her life, following a bus crash when she was at school. She had numerous operations and illnesses and expressed her suffering in startling images featuring amputated limbs, or self-portraits in which her internal organs appear outside her body. Other recurring subjects in her diary are her fascination with ancient Mexican gods, and personal relationships, notably with her husband, the charismatic Mexican artist Diego Rivera. Kahlo worked rapidly, using coloured inks, crayons, and gouache, and filled the small pages of her diary with dramatic and surprising images. 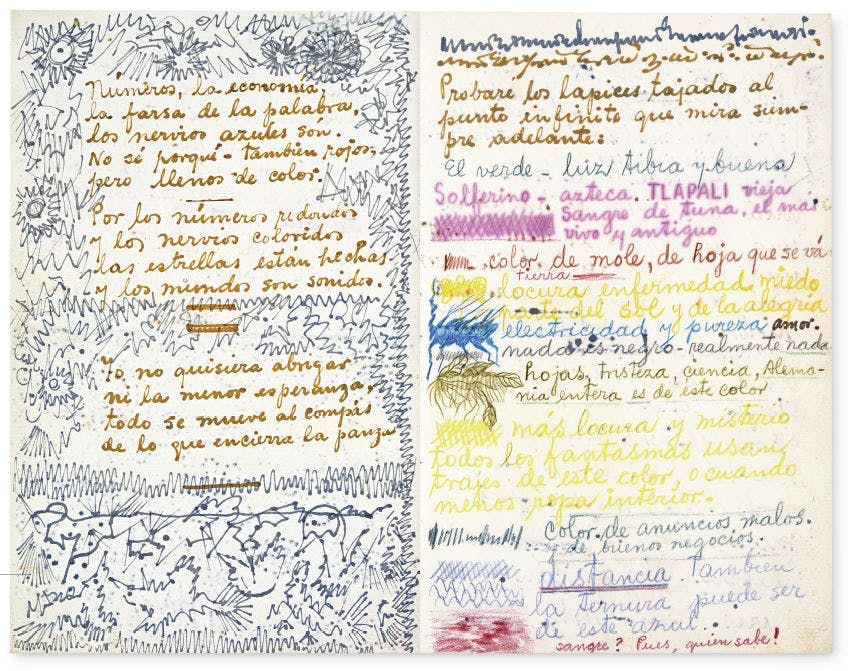 Each page of the diary is different. Here, Kahlo talks about colours and the free associations that they have for her. “I’ll try out the pencils sharpened to the point of infinity,” she begins. Magenta (solferino) recalls the “blood” of the prickly pear; yellow is linked to madness; dark green reminds her of leaves, sadness, and science; blue represents electricity and purity. “Nothing is black.” she says, “Really nothing.” 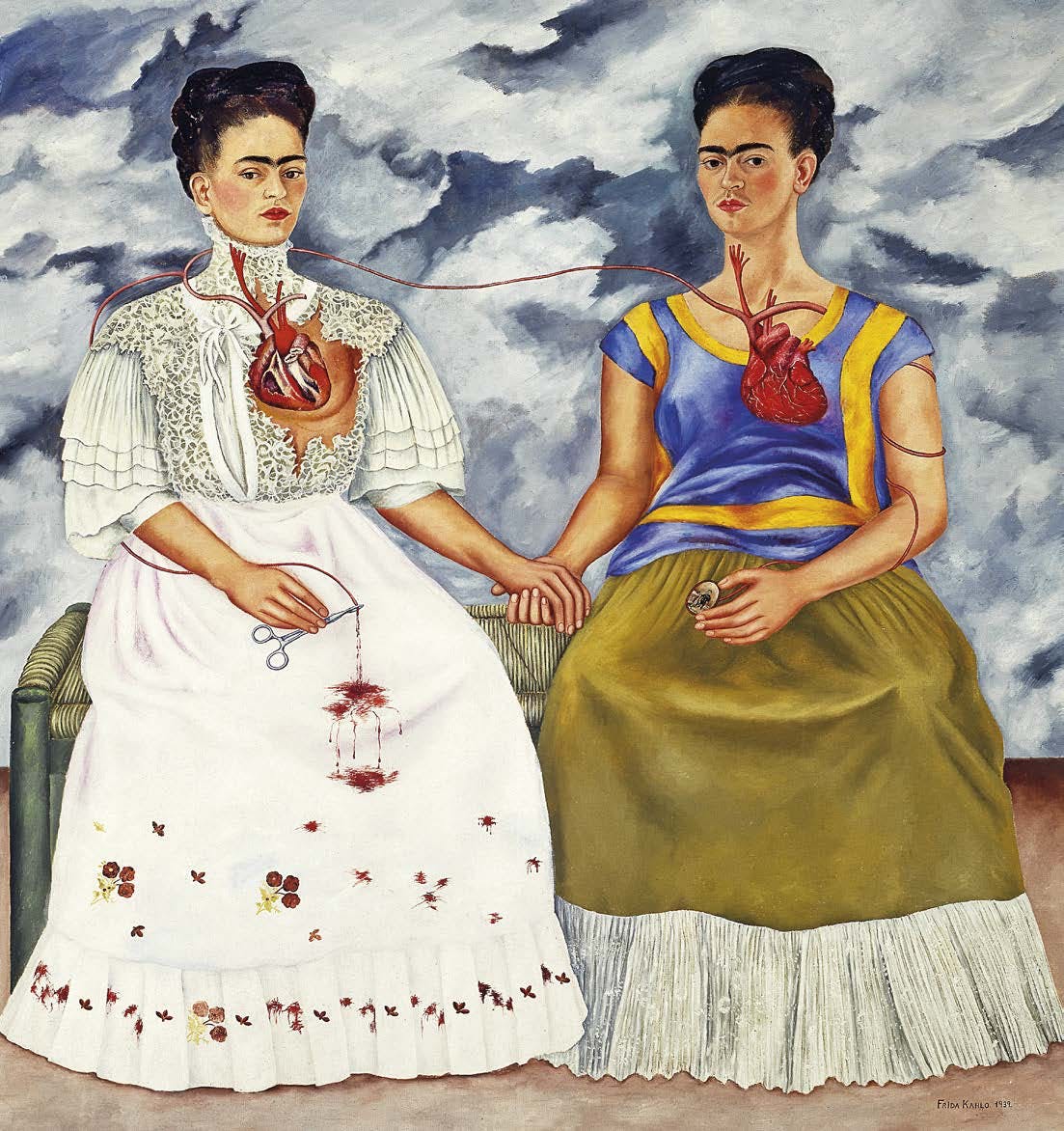 This double self portrait was painted in 1939, just after Kahlo’s divorce from Rivera. On the left she is wearing traditional Mexican dress and her exposed heart is broken. On the right she wears modern clothes and her heart is intact. In Kahlo’s diary she said the work referred to her imaginary childhood friend, but she later said it was inspired by her split with Rivera.

Many pages contain no words at all and are crammed with bizarre hybrids of humans and animals, Aztec gods, psychological symbols, and strange, unique forms. This imagery is very different from that of Kahlo’s carefully detailed paintings. Working at speed made it easier for her to explore the depths of her consciousness. Some of the text is “automatic writing” – a way of writing without thinking, which was believed to reveal the workings of the unconscious mind. It is often associated with Surrealism, but Kahlo did not regard herself as a Surrealist. Kahlo seems to have used automatic writing and a fluid style of drawing to express her pain and anxieties and come to terms with herself. She did not intend to publish the diary. It was locked away for decades after her death and even after it was discovered, only a few pages were exhibited. The diary was not published in full until 1995, when its vibrant imagery and creative self-exploration quickly made it a bestseller.