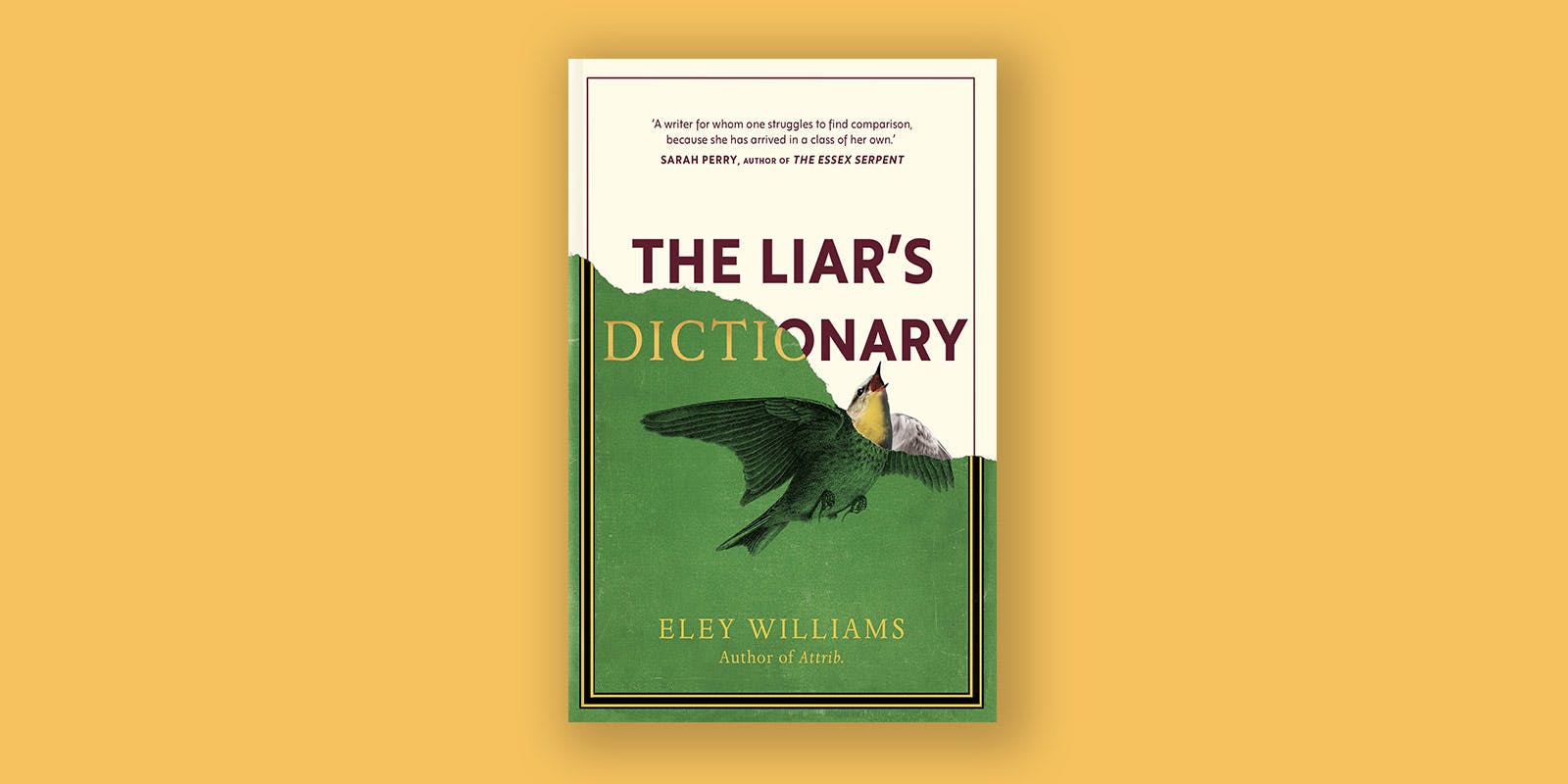 mountweazel, noun: a fake entry deliberately inserted into a dictionary or work of reference. Often used as a safeguard against copyright infringement.

As readers, writers, curious humans, when we reach for a dictionary, we expect to find authoritative information. Bricks-and-mortar truths by which the English (or any other lexicon, for that matter) language operates. With dictionaries we assume a relationship of trust. Unlike so many of our sources of information these days, a heavy, bound physical dictionary carrying any one of several well-worn publishers’ insignia is where ‘correct’ language lives and dies. We take them at their (many thousands of) words.

In Eley Williams’ playful and profound debut novel, The Liar’s Dictionary, young lexicographer’s intern Mallory is tasked with uncovering fictitious entries (mountweazels) hidden in the text of a decades-old dictionary, before it is digitised for modern readers. Through the words and their definitions she finds she has access to their creator’s motivations, hopes and desires. And as she peels back the layers she must learn to negotiate the complexities of an increasingly nonsensical, untrustworthy, hoax-strewn and undefinable life.

The Liar’s Dictionary is a celebration of the rigidity, fragility and absurdity of language. In the passage below, David Swansby – the modern-day editor and namesake of Swansby’s New Encyclopaedic Dictionary – reveals an uncomfortable truth about the accuracy of its entries.

‘I need to talk to you about mountweazels.’

‘Other dictionaries have them! Most!’ David Swansby said. ‘They’re made-up words.’

‘That is true,’ David Swansby replied, ‘and also not a useful contribution.’

David rearranged the pencils and notepads on his desk as he went on. The speech felt rehearsed, thesis-like. He explained that factually incorrect words can crop up in any work of reference. While they do undermine any overall sense of a dictionary’s objective authority, these entries will not necessarily be considered ‘fiction’, however. It was crucial to consider, he said, whether there was any intention to disseminate untruths. The cause for non-facts appearing in dictionaries could be split most simply between those mistakes that occurred as a result of extra-lexical concerns and those that occurred through editorial misunderstandings. David was at pains to point out how other, rival dictionaries botched this: for example, early in the history of the Oxford English Dictionary, all of the drafted definitions that began with the letters Pa written up on slips, ready to be edited, were accidentally used for kindling. This error was blamed on an inattentive housemaid. Moreover, only after the first edition of the OED appeared in print was it discovered that a fugitive bondmaid (n.) entry had been completely left out from the proofs due to misfiling. This kind of unfortunate occurrence was not limited to dictionaries and encyclopaedias, of course. In an interview, the creator of the popular London A–Z Street Atlas described how she momentarily lost possession of 23,000 index cards out of a window thanks to a sudden gust of wind. Many of those hand-completed cards flew onto the top of a bus as it sped down Holborn High Street. This explains the absence of the entry for Trafalgar Square in the first edition. I had no idea whether this anecdote was true or not. I never checked, but David made a very compelling narrator for forgivable editors’ oversights. He could write a dictionary of failures, I thought.

David continued: unfortunate coincidences and misjudgements of this kind could cause an incomplete dictionary but certainly not a deliberately incorrect one – there is no evidence of malicious intent in these instances that contributed to a wrong dictionary designed to mislead the user. Reader. Chance-upon-er. Plain errors of definition as well as mistakes could just sneak into a dictionary or encyclopaedia, and such blunders were contributing factors to the unwitting summoning of so-called ghost words. David spoke about ghost words for some time, grabbing a text from his shelves and quoting directly from it: ‘Yes, ghost words – “words which have no real existence” dum de dum, blah de blah –’ he thumbed through the paragraph – ‘ “being mere coinages due to the blunders of printers or scribes, or to the perfervid imaginations of ignorant or blundering editors.” ’

I had no idea what he was quoting.

Such fruits of ‘perfervid imagination’ were represented by the ghost word dord that ‘famously’ appeared in five consecutive editions of Webster’s New International Dictionary. In 1931, Webster’s chemistry editor submitted a slip that read ‘D or d, cont./density’, intending to indicate that the letter D in upper- or lower-case could stand as an abbreviation for the value of a density in scientific equations. Miscommunication between different editorial bodies within the publishing process meant that Webster’s typesetters received the editor’s slip and assumed that Dord was a headword, defined as ‘density’, rather than an illustration of upper- or lower- case – it was only when dord’s lack of etymology was noted in 1939 that the entry was questioned and eventually expunged.

Dense dense dense. God knows how many people must have used dord in that time. I know I used it at least four times every week, dorddawdledoodling my way through the day.

Many lexicographers and encyclopaedists drew upon their predecessors in a sleight of standing-on-the-shoulders-of-giants (unacknowledged or scandalised as those giants might be by the presumption), and we should count ourselves lucky that dord hadn’t worked its way into Swansby’s pages.

At this point in his lecture, David Swansby gave a nervous cough. He went on, avoiding my gaze.

Some dictionaries deliberately constructed and disseminated fictions in order to protect their contents, whereby the violating act of inserting a fictional entry enabled that entry to become an anti-violation device. Think of it this way, David said: if (if!) you were compiling a dictionary, it would be very easy to purloin another person’s work and pass it off as your own since words are words are words, etc., etc. But if they made up a word and put it in their text and then saw that it had bobbed up in your pages, they’d know you copied their stuff.

Mountweazel: the noun that refers to these bogus entries cooked up and inserted into a dictionary or encyclopaedia as a means of protecting copyright. Misinformation, fake news – gotcha, pal.

This was a strategy also used by cartographers to safeguard their maps: just plop a non-existent ‘Trap Street’ in amongst the roads and byways in order to tell upon tracing replication in other publications whether other maps have copied yours.

I permitted Tits the cat to curl up in my lap as David went on. He explained that mountweazels were named after one of the most famous fictitious entries, printed amongst the pages of The New Columbia Encyclopedia (1975). Lillian Virginia Mountweazel sits unobtrusively in the company of the composer Mussorgsky in the foothills of Mount Olympus and Mount Rushmore:

Mountweazel, Lillian Virginia, 1942– 1973, American photographer, b. Bangs, Ohio. Turning from fountain design to photography in 1963, Mountweazel produced her celebrated portraits of the South Sierra Miwok in 1964. She was awarded government grants to make a series of photo-essays of unusual subject matter, including New York City buses, the cemeteries of Paris and rural American mailboxes. The last group was exhibited extensively abroad and published as Flags Up! (1972). Mountweazel died at 31 in an explosion while on assignment for Combustibles magazine.

I liked the sound of Lillian Virginia. It was a shame she didn’t exist.

‘So there are some of these fake words in our dictionary?’ I said.

‘In a manner of speaking,’ David said.

He handed a printout to me. Tits was excited to see movement across the desk and perked up beneath my hand. The piece of paper was slightly coffee-damp around the edges.

It was a scan of a Swansby’s dictionary page. The scan was not a good one, with the spectre of David’s fingertips visible at its sides. A single word and its definition were circled halfway down the column.

A good word, I thought. I can see the use for that. 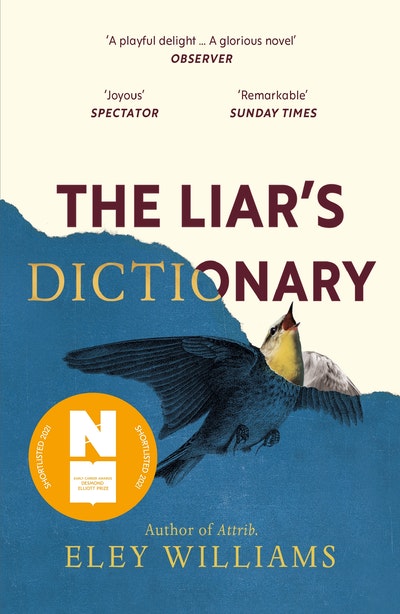