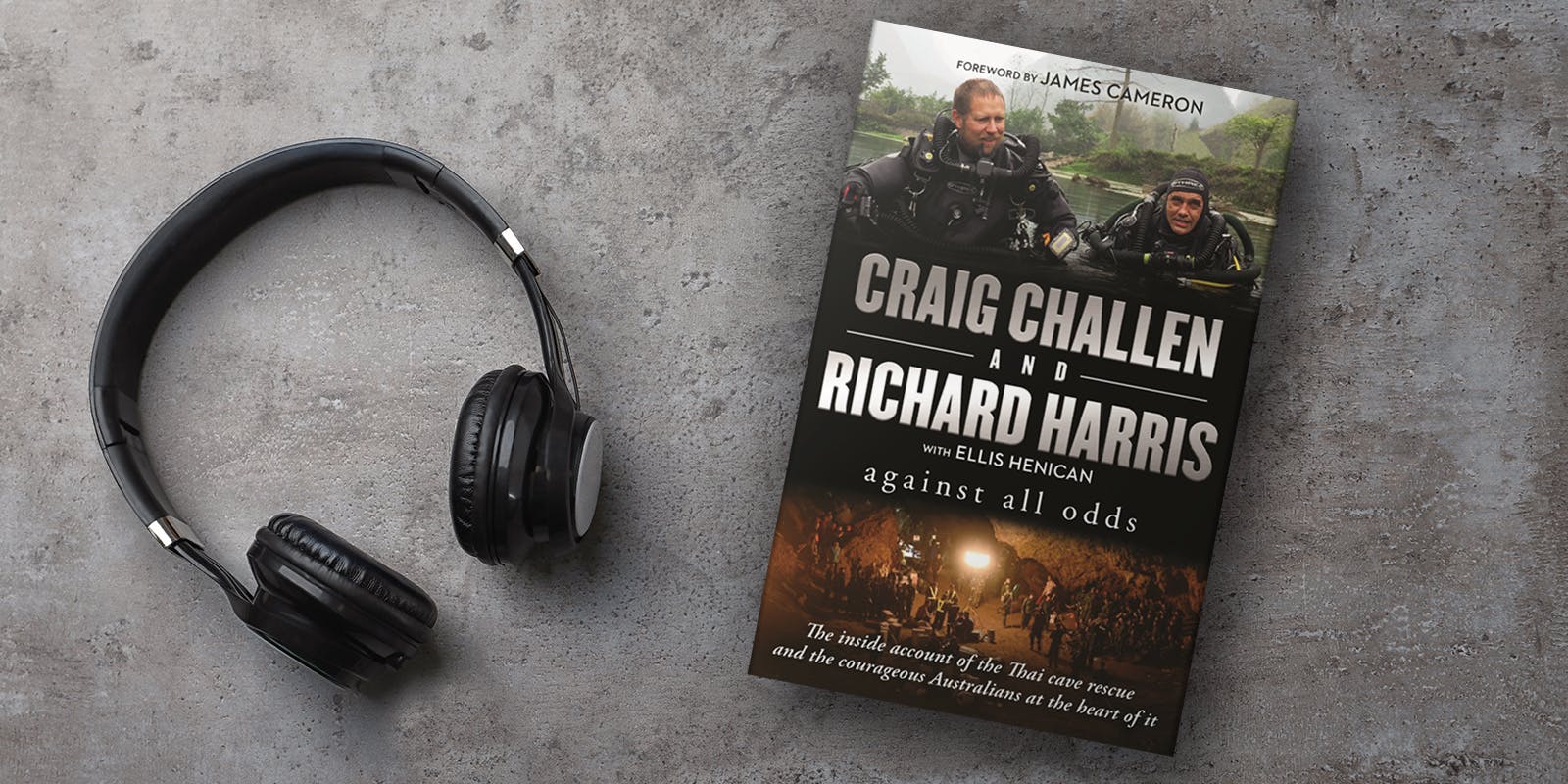 From Against All Odds, Richard ‘Harry’ Harris seeks an outside opinion on a crazy idea.

Against All Odds is Craig Challen and Richard ‘Harry’ Harris’s inside account of the Thai cave rescue that captivated hearts and minds around the world. But when the two Australian cave divers – the former a retired veterinary surgeon and the latter an anaesthetist – were summoned to help out with the rescue, they were entering uncharted waters in more ways than one. For a start, the physical realities of the cave system within which the Wild Boars soccer team members were trapped reduced the likelihood of successful rescue by most ‘conventional’ methods. A pinpoint drilling operation was deemed impossible; Elon Musk’s submarines, unworkable; swimming the boys out, improbable; and leaving the boys to wait out the monsoon rains was not only inhumane, but poor hygiene within the cave would almost certainly lead to spread of illness and potential deaths. The rescuers were not just running out of options, it seemed there simply weren’t any options…

When British cave diver and rescue coordinator Rick Stanton texted Harry with the question Could you sedate someone and dive them out?? Harry’s response was an instantaneous Sedation not an option. Little did he know in that moment, it was rapidly gaining traction as the preferred method of retrieving the 12 teammates and coach of the Wild Boars.

Hours later, Harry received a call from the Department of Foreign Affairs and Trade. The ball was rolling. Harry and Craig were heading to Thailand to bolster the rescue effort in any way they could. From the pages of Against All Odds, in the passage below Harry contemplates the finer details of sedation as a rescue technique, and calls in a second opinion from left field.

If I had to do this – and I meant if – how would I do it? First of all, what drug would I use to sedate the boys? I considered lorazepam. Too long-acting. I considered midazolam. Too unpredictable. I considered clonidine. Not potent enough. Then I started thinking about a drug called ketamine.

Ketamine goes by many names. Ketalar is the most common, though the label could just as easily say Ketaminol, Ketanest, Ketaset, Calypsol, Tekam or Vetalar. Whatever the brand, it’s all the same stuff. Ketamine has proven itself over the past fifty years as a reliable sedative in the operating theatre. A shot of ketamine, either intravenously or into the muscle, will send a patient into a trancelike state while also providing pain relief and hypnosis. It’s a nice drug with relatively few side effects. Blood pressure, breathing and airway reflexes – generally speaking, they all remain pretty stable.

Though new anaesthetic drugs keep appearing and many of them have grabbed their share of the market, ketamine has never really gone away. Synthesised in 1962, ketamine was first tested on human prisoners in 1964 – the year I was born. Following its approval six years later by the US Food and Drug Administration, the drug was used to anaesthetise wounded American soldiers during the Vietnam War. It quickly found a place for itself in the dispensaries of the anaesthetic departments of hospitals around the world. It wasn’t the subtlest or most sophisticated drug, but it was safe, predictable and easy to work with. For those same reasons, veterinary surgeons also started using ketamine to sedate horses and other large animals, and eventually added dogs, cats, rabbits, rats and other smaller creatures to the K-list.

I talked with Craig about this. He’d had plenty of experience using ketamine with his four-legged patients. In fact, he’d used more of it in his practice on animals than I ever had in mine on humans. But both of us had the same feelings about the drug. It was a reliable workhorse and relatively difficult to screw up. In a pinch, amateurs might even be able to administer it.

Like many other drugs meant for medical use, ketamine has also found its way onto the street. With names like Special K, Vitamin K, Kitty and kai-jai, it has developed quite a following on the international club scene, where exhausted ravers value it as a way of coming down after a long, frantic night on the dance floor – or so I’m told. Because of its capacity to cause confusion and amnesia, it’s also achieved some infamy as a date-rape drug.

But despite ketamine’s colourful and occasionally sordid past, I thought it might be just the ticket here, if all the other rescue options proved even worse. Ketamine is fast-acting. The effects typically begin within thirty seconds after IV injection. Ketamine had a couple of other advantages, too, that might be important in an unpredict­able environment like a flooded mountain cave with a group of patients who couldn’t be thoroughly pre-screened. Ketamine can be given intramuscularly. No need for the added precision of intravenous injections. And ketamine is a very forgiving drug. The dosage doesn’t have to be all that exact. I don’t recommend trying it at home, but it’s more difficult to overdose a patient on ketamine than some other anaesthetics.

Ketamine’s major problem for our purpose, as far as I was concerned, was that its effects don’t last all that long. After half an hour or so, depending on the dosage, it’s common for a patient on ketamine to rouse. This could be a problem for extracting the boys from the cave. There was no way one injection was going to last for the three or more hours I figured it could take to get each of the boys out. Somewhere along the way, they’d most likely need to be given a top-up dose. Maybe once. Maybe several times. Who would do that? How would they do it, and where? I had no idea. But without top-ups, the boys were sure to wake up on the way out of the cave, creating who-knows-what panic and mayhem, and putting everyone in danger, including themselves.

With all this bouncing around in my head, I decided to seek an outside opinion. Sedate these children inside a flooded cave and dive them out somehow? I needed a reality check. Was Rick’s idea just crazy? Could it actually work? And what about ketamine? Was that the right drug? Was there something better out there? I contacted a good friend and colleague of mine in Adelaide, country GP James Doube. James is an inventive jack-of-all-trades, a real-life MacGyver who can come up with a solution to almost any challenge laid in front of him. He has a wider variety of skills than anyone else I know – an expert in everything from organic chemistry to engine repair. He’d spent nearly four years in the Antarctic and on Macquarie Island, a Tasmanian ecological reserve about halfway between New Zealand and Antarctica with a human population of twenty to forty people (and more penguins passing through than anyone would dare try to count). He keeps going back – and not just as a doctor. Sometimes, he’s down there driving boats or doing pest eradication. He knows plenty about pesticides and insecticides. He also helps scientists collect data on a broad class of carnivorous, fin-footed, semiaquatic marine mammals formally known as pinnipeds. You and I call them seals.

As part of that research, James is sometimes called on to jump on the back of one of the animals and stick a needle into its spine, pulling blood samples from the epidural veins. That’s tough enough with the regular-size fur seals, who are rarely much taller than a metre or heavier than forty-five kilograms. But he also jumps on elephant seals, who can grow up to five metres and over 3000 kilograms.

‘It’s a relatively safe thing to be doing,’ he told me one day, ‘as long as they don’t roll over and crush you.’

James added that sometimes the scientists toss a modified butter­fly net over the elephant seal’s head. ‘Like a bag,’ James said. ‘It seems to calm them a little.’

Hmm, I thought to myself. That’s worth remembering.

I knew that James had occasionally been asked to anaesthetise a seal, and I remembered him telling me about one he’d put under with ketamine while he was working in the Antarctic.

‘James,’ I said when I got him on the phone, ‘I want to run some­thing by you. You’ve done a lot of weird stuff with anaesthesia in strange places.’

‘I guess so.’ He couldn’t dispute that.

I told him I was heading to Thailand, where I might be called on to anaesthetise some kids stranded in a flooded cave. ‘What do you think about the idea of giving them some ketamine before diving them out?’

‘Remember that story I told you about the seal who got away, the one that kept swimming even though he was totally out?’ he asked.

The seal had escaped and jumped in the water. James was worried that it was going to drown. But no. Though it seemed to be sleeping soundly, it kept swimming around, its nose out of the water, apparently breathing comfortably.

‘Even when he was underwater, he was still looking out for his own airway,’ James said. ‘I think your kids should be fine.’

‘That’s very reassuring, James,’ I said sarcastically, though I did in fact take some comfort in the wacky anecdote.

‘They should do at least as well as the seal,’ he said.

That, right there, was the closest thing to actual relevant experi­ence, good or bad, that anyone anywhere had been able to share with me, even though it involved a seal and not a child. The story didn’t relieve my doubt, not by a long shot. But my old friend’s words did inch me towards the view that this notion of Rick’s might not be totally absurd.

I had no idea if the children in Thailand would behave like South Pole pinnipeds. But my own personal MacGyver seemed to think they would.