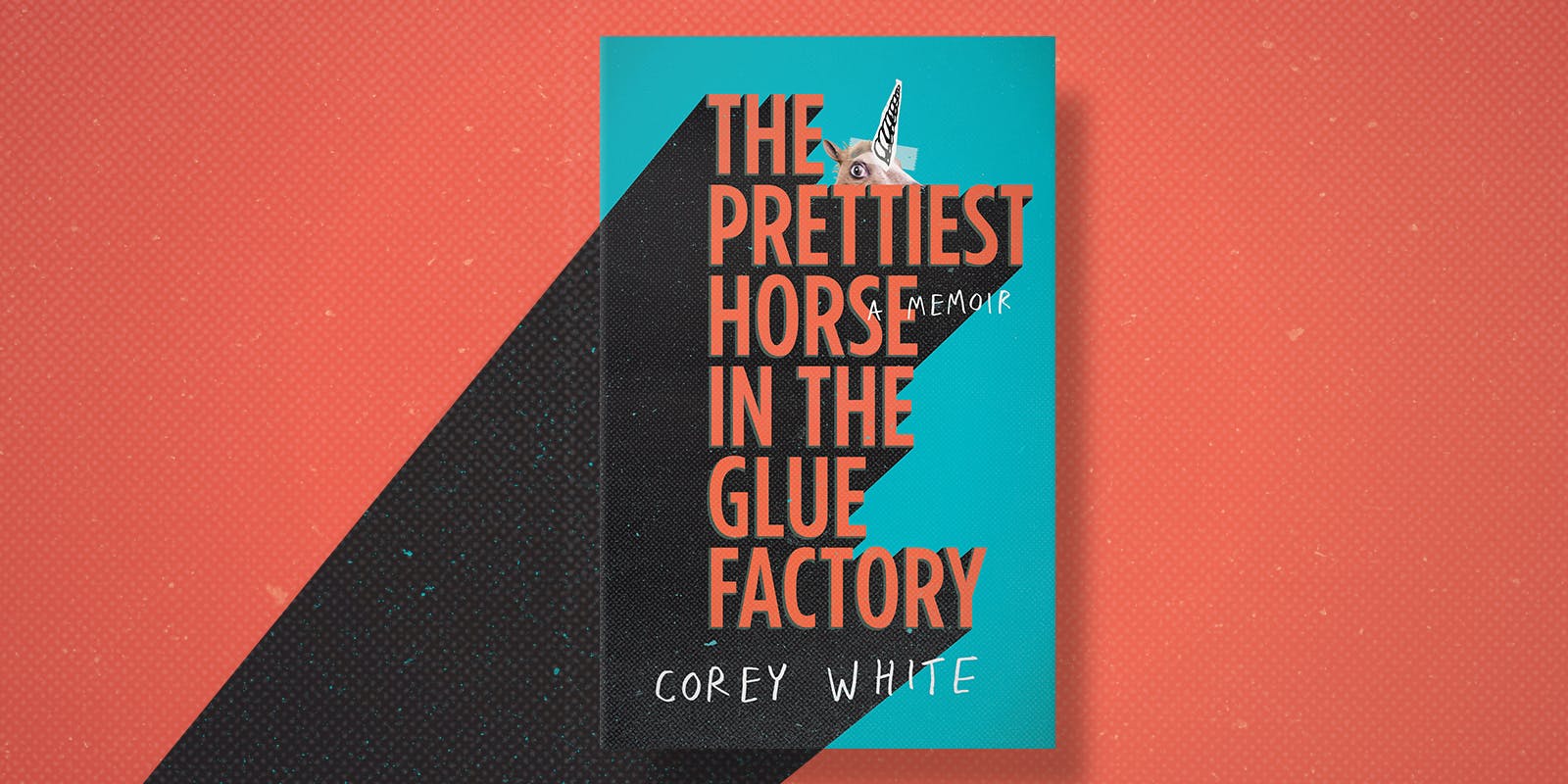 In the wreckage of his childhood, Corey White found a path to self-acceptance.

When comedian Corey White received finished copies of his memoir, The Prettiest Horse in the Glue Factory, he gifted one to his fiancée to place on their bookshelf. In itself, this gesture may seem straightforward enough: a first-time author proud to have achieved the lofty goal of publication. But for White, the paper end product is emblematic of something much greater. After a childhood of neglect and abuse at the mercy of the foster care system, White’s adolescence and early adulthood was a mania of self-loathing, drug abuse, dysfunction and depression. Prettiest Horse… is a memoir of trauma and survival – an at times seemingly hopeless quest for salvation. Oh, and it’s also achingly, savagely, ruthlessly funny. And now – with love, stability and career success in his life – White likens the book on the shelf to an infinity stone. It’s a punctuation point from which he can flip to the next chapter of his life.

White’s forays into the darker reaches of his childhood memories began while writing his debut comedy show, The Cane Toad Effect. For the performance he won ‘Best Show’ at the 2015 Sydney Fringe, ‘Best Newcomer’ at the 2015 Melbourne International Comedy Festival, and he subsequently toured the material in front of sell-out audiences at the Edinburgh Fringe. Since then, his comedy star has steadily continued to rise. In 2019, the memoir arrives in the wake of his successful ABC TV series, Corey White’s Roadmap to Paradise, and on the brink of embarking on a stand-up tour for his latest show, X-Ray. With things on the up and up, it’s a curious time to be invoking past horrors.

‘The Cane Toad Effect covered a lot of events of my childhood, but I wanted to go deeper and drill down into those things and explore them,’ White says of the compulsion to write the book, which he started in 2015. ‘There was a desire to record everything and then move past it, otherwise there’s a danger of being pigeonholed, as being seen as one thing. I wanted to put it behind me in a physical form… like getting all the poison out.’

In the opening pages of Prettiest Horse… cheerful childhood vignettes quickly descend into chaos. As the son of a drug-addicted mother and an unpredictable and violent father, the odds were stacked against White – as well as his sisters – ever to rise above the cumulative damage of their childhood experiences. Then, after losing his mother to heroin and his father to jail, White was separated from his siblings and left to navigate the turmoil of the foster-care system alone.

White’s childhood fragments swing wildly from hilarity to horror. As a demonstration, in one scene a young White escapes a molestation attempt by climbing onto the roof and urinating on the perpetrator. It’s outlandish, hilarious and awful all at once.

Through all of his trauma, White – a kid who refused to go to primary school – somehow knew that reading and books held a key to the dream of any ‘golden future’. He writes: I adore my Little Golden Books. Nothing pleases me more than their shiny golden spines, how they shimmer in the sunlight as I lie on the trampoline. I read the dictionary a lot. Each day I discover new words like magnificent and synchronised. Words are jewels, magic incantations. Deep down inside me, I believe you can read words aloud and become rich or handsome or safe. I am storing up these words for some great purpose in the future.

Ultimately, education was to play a pivotal role in White’s disentanglement from the foster care system. And now, as an author and comedian, writing and words are critical to his continual success as a functioning human in the world. As torturous as it proved to be, revisiting his childhood for the purpose of writing the memoir was also necessary for White’s ongoing healing process. But in order to ‘look his childhood in the mouth’, he not only had to deal with emotional fallout, but also overcome the challenge of memory itself.

As an adult, White has been diagnosed with Complex Post Traumatic Stress Disorder (C-PTSD). A symptom is difficulty remembering linear sequences of events. Hardly ideal when you’re conjuring a memoir. He writes: Time heals all wounds but the wounds to memory. These wounds it keeps fresh against the years. I grab at a memory I do have and another one, attempting to unite them into a linear narrative. I fail and I have to let them slide back into place, to allow the raw darkness to remain between them.

‘It brought up a lot of bad memories. I think it triggered a nervous breakdown. Trying to sift through those memories pushed me to the edge,’ he says. ‘There are enormous blank passages in my childhood. You have to strike a balance between the sketchiness of your own memory, the blankness and readability… There are a lot of passages of my life where I only remember emotions rather than events. So for a coherent narrative I had to go back inside myself to try to piece things back together.’

By addressing the cruelties he suffered as a child, White was able to get to know, even love, the child that he was. And while plucking the laughs from the smouldering remnants of his youth, he found enjoyment in the writing itself.

‘Life is a very heterogeneous thing,’ he continues. ‘I don’t think anybody’s life is just one relentless misery… If you want to be truthful you should show all the different phases of life: the bleak ones, the laughing ones, the sad ones, the joyous ones. I think it’s important to provide humour because it’s part of who I am, but also because it’s a truth and it helps with dealing with the darker parts of the book.’

In comedy, White has also found community, purpose, and the ability to connect, relate, build bridges between himself and audience members. ‘Comedy is a kind of mindfulness,’ he says. ‘You have to work through things, it’s an introspective process. You go around the world observing things and your reactions to things and I think insight flows from that, and greater awareness and understanding stems from that.

‘When you start writing comedy you start with very dry, logical, witty jokes. Then you realise the deeper laughs come from emotion – it’s deeper than just words… And that’s mirrored in my journey from acknowledging trauma intellectually to exploring it existentially, on an emotional level.’

With Prettiest Horse… entering the world, White describes his emotional state as ‘excitement and anticipation tinged with great amounts of anxiety’. He’s hopeful the book will provoke people to consider the circumstances of others and the role that luck plays in each of our lives.

‘I hope people can reflect on foster care, and children who come from broken or abusive or neglectful homes, and what society should be doing to look after these children, given the ramifications of this abuse on individuals rippling throughout the community,’ he says. ‘People say I’m so brave or insightful. I don’t think anything about who I am was chosen. Luck has been such a massive part of my life. I could have just as easily become a very different person. I could be in jail now or could have overdosed to death… I want people to remember that there is something indestructible in the human spirit. And also to have a sense of the chains of suffering that shackle large parts of society. These things can be cast off.’

The Prettiest Horse in the Glue Factory Corey White

Congratulations to all our designers longlisted for Australian Book Design Awards in 2020.