The moment fashion’s old guard were overwhelmed by a revolutionary force.

Fashion Climbing is the enchanting memoir New York milliner and fashion photographer Bill Cunningham left behind. Capturing the madcap times of his early career and the fashion scene of the mid-20th century, the book charts a period of dramatic change within the couture industry. In the passage below, he details the overwhelming triumphs and humiliating defeats of the fashion wars of the mid-20th century.

In the 1930s and ’40s, fashion revolved around the movies. In the 1950s and ’60s, fashion was inspired by society. Fashion climbing replaced social climbing with the birth of Christian Dior’s New Look of 1947. An enormous change of fortune took place during the war, leaving half the names in the Social Register impoverished. Once‑swanky resorts and private clubs had sprung leaky roofs and were now in search of new fortunes to embellish their stomping grounds. The white ermine that cuddled the elegant snobs of the 1930s had turned yellow, or were being cut up to make collars and cuffs in a last desperate hold on the ladder of affluence. The Protestant‑dominated social playground of Park Avenue was the scene of bitter battles. Regiments of Seventh Avenue manufacturers and Texans turned into superb fashion climbers, using the ballrooms of the Waldorf, Plaza, and Astor hotels as the most voluptuous battlefields since the days of medieval splendor, when knights in shining armor fought for the titles of Europe. The weapons of this historic battle were to be fashion. The invading army advanced in shimmering splendor, while the old guard threw up its first barricade of moth‑eaten chinchilla, and tarnished brocades and sapphires. As in the days of old, the French came to the aid of the revolutionary forces, led by a Monsieur Christian Dior. He brought with him a new miracle weapon, the atom bomb of fashion, his New Look. The bomb scored a direct hit in New York City: total destruction of existing armor. The Social Register mortgaged its Newport and Southampton summer cottages, along with its mighty palaces lining the gold coast of Fifth Avenue. The invading army was sweeping across Central Park’s green lawns, and the baronial castles of Fifth Avenue couldn’t stand the barrage of new ammunition: fashion. The pedigreed family label was totally eclipsed by those of Paris designers sewn into the collars of the advancing army. The news media of the world headlined the names of Dior, Fath, and Balenciaga. At each charity ball skirmish, the big scream was, ‘Whose dress is it?’ as reporters bolted from behind potted palms. The gossip columns were filled with the names of fashion designers. The press cared little about the wearers, so long as their gowns had a label. The old guard indulged in the new ammunition, and each party became a rivalry of fashion. It was like a superb game of chess, with all the pawns gowned by Paris.

Lurking in the background were the newly christened American designers. Their playing field was a checkerboard, slipcovered in less imposing fashions; the game was fought each day at the luncheon tables of the Colony and Le Pavillon restaurants, where the best‑looking coats and suits elbowed each other for front tables. Every night a new charity ball was formed by the old guard, as the night‑before party had been conquered by the invaders. The hysterical pace of thinking up new diseases to benefit from these charity balls staggered the imagination. Some people invented diseases no one had ever heard of; so long as it sounded sickening and deadly, it could have its charity ball and allow the opposing forces to don their new finery. The biggest battles that will go down in history were all fought at the April in Paris Ball, led by General Elsa Maxwell. Miss Maxwell encamped her battalion at the first party, like an English picnic, at twenty‑five dollars a head, held high in the Starlight Roof of the Waldorf. The audience was mostly old guard while the fashion climbers were onstage, performing a tableau. Mr. John, the milliner, portrayed Napoleon. Each year the battlefield enlarged, with the invaders being seated next to kitchen doors and in Siberian corners. The price of tickets steadily climbed. The arrival of the invaders’ fashion armor eclipsed the badly wounded old guard’s satins and laces. The newcomers were being splashed over the photo pages of the next day’s papers.

Each succeeding year the invaders advanced on the ringside tables in more ravishing plumage. The old guard’s social big‑wigs counterattacked successfully in 1958. Their leader wore the first solid gold beaded gown. The invaders were shocked, and totally defeated in their tulle and brocades. Every newspaper headlined the gold‑beaded socialite. The following year, the Waldorf ballroom was dynamited by the invaders, wearing a blizzard of beaded gowns. This was the year that the fashionable women adopted the wearing of sunglasses in the evening. The trillions of sequins and beads wiggling over the fannies of the fashion‑climbing warriors nearly did in the opposition, but with one last gasp, the Social Register crowd went back to its exhausted sewing machines, reappearing the following year as the understated maid. Not since the days of the Puritans had anyone seen such dull clothes. The advancing army appeared with diamonds on diamonds, and solid beaded gowns became three‑dimensional, hanging like icicles all over the body. Television followed the new conquerors onto the battlefield in 1963, to record the hardest fought battle of the fashion‑climbing war. The old guard just faded away. The ladies who once sat by the kitchen doors now found themselves at the ringmaster’s table, with no one to crack their whips at. The invaders would now have to look at each other, as Valhalla had been destroyed in the battle.

Out of the old guard, a new young guard emerged with a strategy that was to change the fashion world. Their formula was a striptease. After years of their elders competing with the waterfall of new clothes worn by the rich invaders, young blue book society turned Park Avenue into an elegant burlesque stage, where each new fashion weapon of the invaders was removed; as the invaders came swirling up the avenue in tent coats, the new guard marched swiftly down in the skinniest, hungriest coats you’ve ever seen. The invaders wore their status mink coats as long as they could— the more the better, was the motto. The new guard shortened theirs to three inches above the knees, and many a climber nearly died having her mink coat shortened. This was the most genteel striptease act the fashion world had seen, reaching alarming proportions by late 1963, in the form of slip dresses and topless bathing suits, which finally drove the fashion‑climbing weapons off the world’s stage.

American designers were used as effective new weapons for a short time. The names of Norell, Sarmi, Chez Ninon, Mainbocher, and Ben Zuckerman were a surprise, and this attack by the invaders flourished. But it didn’t last long, as the designers climbed too fast themselves and were soon sitting at the best tables for lunch and dinner, thus putting them in the firing line of the invaders: Seventh Avenue, which marched on the coat-tails of the women they dressed. The designers got caught wearing the customers’ coats too often, and no general likes to be seen in the same uniform the buck private is wearing. The opera and the Easter parade were other colorful fields of battle, but these were destroyed by a bomb more powerful than fashion: television, which has never been kind to fashion. Since its orbit into life, TV has wounded fashion climbers in each combat.

Indulging in fashionable society is quite a deadly game. The sidewalks of the fashionable East Side are covered with the footprints of slain invaders. The party pace is faster than a squadron of jet bombers, and equally as devastating. You’re only wanted while you’re news or new; once the social leaders have raped the message or news you represent, you’re a dead duck. The only way to last is never to let anyone really know you, for society is only friendly to new faces, out of fear that you’re better than they. It’s that old insecurity of American climbers. At all those fabulous parties you read about, 85 per‑cent of the guests don’t go to enjoy themselves, but to rub shoulders and climb, and show off their wealth. These poor devils go out on the town not for relaxation and fun, but as a challenge known only to army generals in the heat of combat. When one stops to remember all the glamorous fashion climbing that was achieved under the banner of humble, poor charity – the sole cry of each of the thousands of luncheons, balls, and theater parties that set the battlefield – oh, how I yearn for my youthful days, when women wore lovely clothes for the sheer pleasure and joy of pleasing their friends. 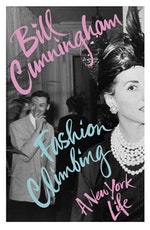