I’ve been a hopeless insomniac my whole life. But at some point in my early forties, I finally found a remedy that works. I lie in bed, staring into the darkness, doing a mental count of the number of men I’ve slept with.

The exact number? I honestly don’t know. That’s why I fall asleep. The strain of trying to remember every single one is quite tiring. I usually get to around forty-something before I lose count. Or drift off.

Now before you start questioning the possibility that I might be a tad – promiscuous – I want you to know that I’m not the least bit bothered by what you think of my ‘number’. Just like I don’t care how many people you’ve slept with. All those studies and surveys about what an acceptable ‘number’ should be are just sanctimonious noise.

As I write this, I am a 47-year-old single woman who’s been having sex since the age of seventeen. I am aware that my ‘number’ is considerably higher than most of my friends’. I also know that it’s much, much lower than many others’. Plus, the ratio of men I’ve shagged versus men I’ve dated is surprisingly low. I’ve been on hundreds of dates in my search for Mr Right. Hundreds. This is not an exaggeration.

Aside from a handful of long-term relationships, I’ve been a serial dater for the better part of thirty friggin’ years. But, while all those years of dating did provide me with an unusually effective insomnia cure (and, thankfully, no STIs), they have, so far, failed to locate my Mr Happily Ever After.

It’s not like I haven’t tried to find Prince Charming. I’ve given it a bloody good go. My frog-kissing game is strong. I’ve dated guys on almost every continent. I’ve been on more blind dates than is reasonable for anyone to endure in one lifetime.

However, despite my best efforts, and the fact that I was once voted ‘TV’s most spankable personality’*, I have always been romantically challenged.

I’m challenged in quite a few areas, actually. I’m completely useless in the kitchen. I’ve never been able to solve a Rubik’s cube. I’m crap at tennis. And I cannot, for the love of Oprah, understand how the stock market works.

But above all, I’m challenged in the romance department.

Some people are lucky enough to meet their soul mate randomly, effortlessly, and perfectly by chance. For others, it’s a full-time job. For me, it has, so far, proven impossible.

I swear, if one more person says to me, ‘I just don’t understand why you’re single’, I’ll claw my own bloody eyes out.

My own parents even decided to have the we-don’t-mind-if-you’re-a-lesbian chat with me sometime in my early thirties. I imagine they were confused about why their little girl hadn’t settled down with a lovely man and started popping out babies. And the only viable reason they could think of was that I didn’t like boys. When Mum sat me down to have a serious conversation, it went something like this:

Mum: All your father and I really want is for you to be happy. So we want you to know that it’s totally fine with us if you find that happiness with a man . . . or with a woman. Okay?

I guess I could simplify it by saying the reason I’m single is because I just haven’t met the right guy. And I have steadfastly refused to settle.

It has also become blaringly obvious, during my three disastrous dating decades that I am a weirdo magnet. For reasons I do not entirely understand, I often find myself in ridiculously bizarre and sometimes extraordinary interactions with the opposite sex. I’m the girl everyone turns to at a dinner party, keen to hear about my latest dating drama (which usually results in cries of, ‘He did what?’ as everyone roars with laughter at my expense). My married friends have been living vicariously through me for years. I once penned a weekly magazine column documenting the perils of single life. Hell, I even made a career out of sharing my deepest, darkest dating disasters on my own radio show.

I have also considered the possibility that I’m just not the marrying kind (if anything, I’ve realised that marriage can make some people very, very unhappy).

And so, with no imminent wedding to plan, I decided to write this book: a collection of my most memorable and unintentionally entertaining courting encounters.

I would really like this book to be a celebration of all the smart, self-sufficient and self-respecting kickarse single gals who also refuse to settle. In a world that still loves to measure a person’s happiness based on their relationship status, we know there are plenty of other ways to have fabulous and fulfilling lives. Being single doesn’t mean there’s something wrong with us. We don’t feel like we’re ‘on the shelf’ or that we’re unlovable. ‘Single’ isn’t some kind of unbearable holding pattern we begrudgingly exist in, between relationships. And we’re certainly not living in a state of limbo, waiting despondently for Prince Charming to come rescue us from our singledom.

No, we’re not looking for ‘Mr Perfect’ – we all know he’s hanging out in Middle Earth somewhere with Santa Claus and the Easter Bunny. And please stop assuming we’re all just ‘too picky’. We are not too picky. We’re choosey. There’s a difference. We’ve already managed to create valuable and meaningful lives without a significant other, so we’re only interested in meeting someone who adds to what we already have, not someone who detracts from it.

I will concede, however, that all of the above does make us pretty ruthless on the dating front. I guess that’s why people like me, who have been single for so long, seem to have the most difficulty finding love.

On the upside, it has enabled me to accumulate this vast and mostly humorous assortment of dating anecdotes.

I share my romantic misfortunes in sympathy with anyone else who’s experienced more lows than highs on the always nerve-racking, sometimes horrifying and often stomach-churning dating rollercoaster. This is for you unwavering romantics who have found yourselves in dating hell or on a date from hell. I trust my dating disasters will help you feel a little better about your own.

As you read the following stories, some of you might think at times, ‘Oh come on, she must be making this shit up.’ But I assure you, as outrageously ludicrous and shockingly unbelievable as some of these encounters might seem, this is not a work of fiction. Everything I have written about actually happened (although some names have been changed to protect me from the wankers).

And please don’t mistake my intentions. I am not a man hater. Never have been. Never will be. I adore men. Most of my closest mates are men. I’ve just been exceptionally unfortunate with them in a romantic capacity.

And so, to all the men I’ve loved, and dated and slept with. Thanks for the memories – and the following yarns.

* (Interpret this as you wish.) 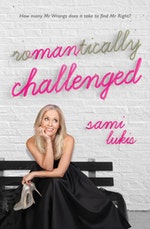 The road to love is paved with dating disasters… One of Australia’s favourite personalities shares the ups, downs and in betweens of three decades of frog kissing in this hilarious, engaging and delightfully honest book.