13½ incredible facts to learn about Earth

Curious about the entire world?! We’ve got the book for you! Packed with everything from amphibians to pharaohs, discover 13½ Incredible Things You Need to Know About Everything.

1. The ground may feel firm beneath your feet, but Earth’s outer layer, the crust, is only a few kilometers thick in places. This rocky surface makes up just one percent of Earth’s total volume. 2. The crust is broken into pieces called tectonic plates, which fit together like a giant jigsaw puzzle. However, unlike puzzle pieces, they are constantly on the move, shifting around and crashing into each other.

3. Earth’s largest layer, the mantle, is about 2,900km thick. The tectonic plates float on the mantle, which is made of solid rock but flows very slowly due to the extreme temperature and pressure.

4. Wrapped around the centre of our planet, the outer core is a liquid layer of iron and nickel. There, swirling metals create Earth’s magnetic field. 5. Tectonic plates all move at different rates, and the Nazca plate (the plate west of South America) is the fastest. Every year it moves approximately 16cm, about as fast as hair grows.

6. Earthquakes and volcanoes often happen along plate boundaries. One such hot spot is the East African Rift, where the African plate is slowly splitting in two. Eventually a new ocean will fill the ever-widening gap. 7. Earth’s continents were once joined together in a single landmass known as a Pangaea. Scientists predict that in about 250 million years, the continent will merge once more.

8. Every planet in the Solar System is named after a Greek or Roman god, except ours. The word “Earth” comes from the Anglo-Saxon word “Erda,” which means “ground” or “soil”. The word is thought to be 1,000 years old.

9. The inner core is made mostly of iron. At 5,000-6,000 degrees Celsius, it is about as scorching as the sun. There is so much pressure at the centre of Earth that, despite the heat, the inner core is solid. 10. If you could dig a tunnel through Earth from one side to the other, it would be 12,756km. In reality, the deepest tunnel ever dug, the Kola Superdeep Borehole in Russia, barely scratches the surface at 12km deep.

11. Mountains are formed along the boundaries of tectonic plates. The longest mountain range of all – the Mid-Atlantic Ridge – is hidden deep in the ocean. It was formed by plates pulling apart, causing hot magma to erupt from the mantle and mold into stiff peaks.

12. Forget sun and sand! The world’s biggest desert is Antarctica. Inner parts of the cold continent get less than 52cm of precipitation each year, even though its ice sheet contains 90% of Earth’s freshwater. 13. Earth is constantly rotating on its axis, taking 24 hours to make one turn relative to the sun. If you were to stand still at the equator, you would be spinning around the centre of Earth at nearly 1,600km/h.

Ready for a myth-busting “half-fact” about planet Earth?!

13.5. Earth isn’t flat but it isn’t round either – not perfectly round anyway. It’s an oblate spheroid, like a squashed ball with a bulge around its middle. The distance from the centre of Earth to sea level is about 21km greater at the equator than at the poles.

Think you know everything now? Think again! Grab a copy of 13½ Incredible Things You Need to Know About Everything and learn about fashion, funghi and more. 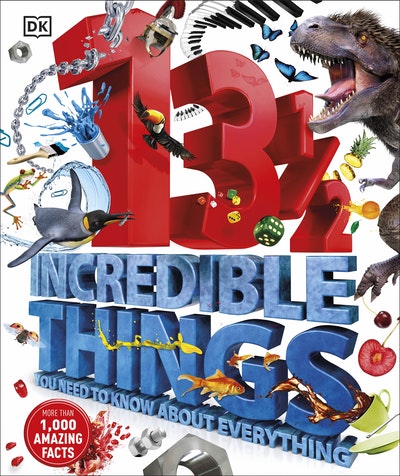 13½ Incredible Things You Need to Know About Everything DK

Test your creativity and brush up your building skills in this Halloween-themed LEGO activity pack.

A mash of ripe bananas is delicious baked in this sweet, bread-like cake, while spices and nuts add flavour and crunch.