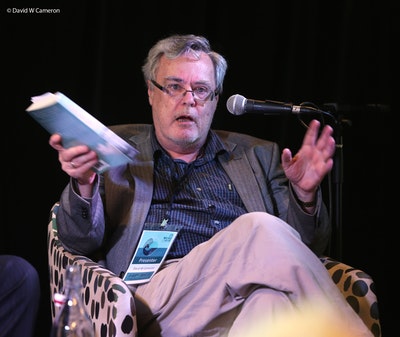 This event is hosted on Zoom. Bookings are essential. Once you have booked your ticket you will be sent a link via email to join in the Zoom meeting. Click on the register button, ask in any library branch or phone 4304 7500 to book your place.

Lovers of Australian and military history, won't want to miss the opportunity to hear from David, an accomplished scholar and author, as he talks about what life was like for the convicts of the notorious Port Arthur prison.

An evocative narrative of the many tragedies that fell upon those who were forced to serve time in Port Arthur, one of the most remote and feared convict locations in Australia.

Detailing the development of the prison and its outlying stations, including its dreaded coal mines and providing an account of the changing views to convict rehabilitation, Convict-era Port Arthur focuses in on a number of individuals, telling the story through their eyes. Charles O’Hara Booth, a significant commandant of Port Arthur; Mark Jeffrey, a convict who became the grave digger on the Island of the Dead; and William Thompson, who arrived just as the new probation system started and who was forced to work in the treacherous coal mines.

Convict-era Port Arthur will for the first time provide a comprehensive history of Port Arthur, its horrors and its changing role over a fifty-year period. In gripping detail, using the experiences and words of the convicts, soldiers and administrators who spent time there, David W. Cameron brings to life these deeply miserable days.

David W. Cameron received his PhD in biological anthropology in 1995 at the Australian National University and is a former Australian Research Council QEII Fellow at the Department of Anatomy & Histology, University of Sydney.

He has conducted fieldwork in Australia, Europe, the Middle East and Asia. He is the author of several books on Australian military history and primate evolutionary biology and has published over 60 papers in internationally peer-reviewed journals. He lives in Canberra.

Convict-era Port Arthur
David W. Cameron
An evocative narrative of the many tragedies that fell upon those who were forced to serve time in Port Arthur, one of the most remote and feared convict locations in Australia.
Read more