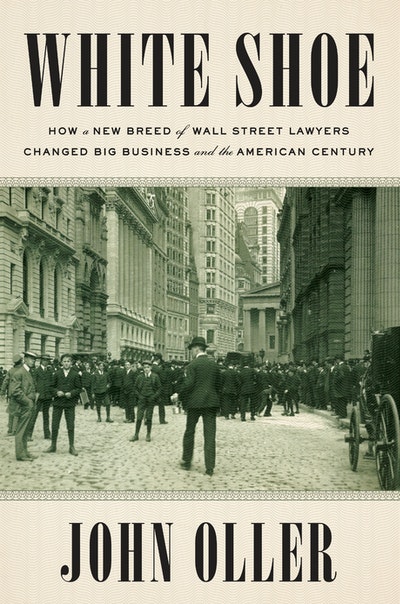 The rollicking true tale of how an ambitious new class of attorneys devised and implemented the strategies that made American business synonymous with big business, and helped make Wall Street the center of the financial world.

The legal profession was once one of fairness and justice, humble lawyers arguing cases in court before a judge and jury. But around 1890, a new type of lawyer was born, one who understood business as well as the law, and employed his expertise to guide corporations, to find loopholes and foresee legal roadblocks in the way of profits. These lawyers were held on retainer as virtual business partners, negotiating on behalf of their companies and steering the way through thorny legal fights. The result was the unprecedented rise of the power of big business, the establishment of a new class of corporate titans.

White Shoe focuses on three leading lawyers of the era. Paul Cravath revolutionized how corporate law was practiced, and guided his client George Westinghouse in his war against Thomas Edison over control of electric power. Frank Stetson fiercely protected the fortune of J.P. Morgan when the government attempted to break up Morgan’s gigantic railroad trust. William Nelson Cromwell orchestrated a revolution to create the new nation of Panama, then secured the U.S. as the overseer of a new canal connecting the Atlantic to the Pacific—the lawyer “who taught the robber barons how to rob.”

Author John Oller gives us a richly written glimpse of turn-of-the-century New York, from the grandeurs of private mansions and elegant hotels and the city’s early skyscrapers and transportation system, to the depths of its deplorable tenement housing conditions. This is an entertaining tale that includes some of the biggest names of the era, including J.P. Morgan, E. H. Harriman, Theodore Roosevelt, and Elihu Root, exploring the decadent lifestyles of the nation’s richest titans while spotlighting the foundation of America’s corporate capitalism.