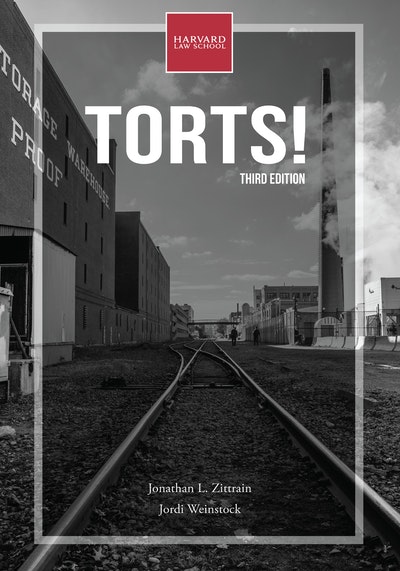 A law school casebook that maps the progression of the law of torts through the language and example of public judicial decisions in a range of cases.

A tort is a wrong that a court is prepared to recognize, usually in the form of ordering the transfer of money (“damages”) from the wrongdoer to the wronged. The tort system offers recourse for people aggrieved and harmed by the actions of others. By filing a lawsuit, private citizens can demand the attention of alleged wrongdoers to account for what they’ve done—and of a judge and jury to weigh the claims and set terms of compensation. This book, which can be used as a primary text for a first-year law school torts course, maps the progression of the law of torts through the language and example of public judicial decisions in a range of cases. Taken together, these cases show differing approaches to the problems of defining legal harm and applying those definitions to a messy world.

The cases range from alleged assault and battery by “The Schoolboy Kicker” (1891) to the liability of General Motors for “The Crumpling Toe Plate” (1993). Each case is an artifact of its time; students can compare the judges’ societal perceptions and moral compasses to those of the current era.

This book is part of the Open Casebook series from Harvard Law School Library and MIT Press.