In Mother Russia, secrets did not stay secret for long. Information was strength. Informing was ingrained. It was nothing short of miraculous that Colonel Pavel Mikhailov of the 224th Air Detachment, Military Transport Aviation, had been able to hide his sins at all.

The tribunal convened by his superiors had been a lengthy and embarrassing ordeal. But he was better for it, wasn’t he? Bez muki net nauki—no torture, no science. No pain, no gain, the Americans said. Now he’d gotten back his wings—and he wasn’t about to do anything that would jeopardize them again. He would be careful. He would be precise. Above all, he would be sober.

Flashlight in hand, the fifty-three-year-old colonel walked beneath the drooping wing of the monstrous Antonov An-124 cargo plane, taking comfort in the smell of jet fuel. A light wind tousled his thinning gray hair. Rosacea that never seemed to go away anymore pinked the round apples of his cheeks. The night had turned out chilly, but the day had been a pleasant one for spring in Moscow, and the black tarmac was still giving up its warmth. Colonel Mikhailov wore small foam earplugs to protect his hearing, but the whine of the auxiliary power unit and the hydraulic squeal of machinery were muffled music to his way of thinking. He played the flashlight under the broad surface of the swept wing, then carefully checked each of the twenty-four tires, as complete and thorough in this preflight as if he were still a pink-faced cadet at Gagarin Academy.

He’d never wrecked an aircraft, or even had a close call, but as his commanding general said, no matter how skilled a pilot he was, one could only show up for work “looking like a bag of ass” so many times before people began to talk. Ironically, his superiors had not begun to worry until after he attended his first weekly meeting of Alcoholics Anonymous. The Russian government had long been wary of AA—secret meetings and deference to a higher power other than the state lent credence to the general lack of trust in any program created by the West. But more than that, it was Mikhailov’s new attitude that bothered them.

Vodka was as much a part of the Russian psyche as greatcoats and poems about troika rides.

In 1858 the government attempted to re­fill the state coffers drained by the Crimean War by tripling the price of a bucket of vodka. Peasants took oaths of sobriety to protest this tax. Temperance movements swelled as formerly sotted citizens swore off anything more potent than beer—and that just would not do. The Army intervened with crushing aggression on behalf of state alcohol interests, flogging the protesters and using funnels to force vodka down their throats. Temperance groups were outlawed, and more than seven hundred protesters were arrested as rebels.

If Colonel Mikhailov was suddenly worried about handling his liquor, perhaps everyone else should worry as well. Perhaps he was a rebel.

Three decades of service had given Mikhailov guardian angels in high places, men who had flown with him in Afghanistan in the eighties, who still held some measure of loyalty, though they had risen to loftier heights. Skilled pilots with Mikhailov’s experience were hard to ­find—and he told himself he was better while in his cups than half the kids in today’s Federation Air Force when they were flying sober.

The disciplinary hearing had been excruciating. Listening to one’s numerous shortcomings was difficult enough when drunk. A clear head made it nearly unbearable as the panel of generals ticked down the list, fault by disgusting fault. Those well-placed friends didn’t stop the panel from threatening to have him cashiered, but even through the fog of shame he knew better. Had they wanted to take away his pension, they would have simply done it, not threatened it.

Though at times he felt a bucket would have been the perfect vessel from which to drink more vodka, Colonel Mikhailov managed to keep his mouth shut during the process. He did precisely as he was told, and he eventually earned back his wings—wings that brought with them enough trust for this mission.

He’d flown his Antonov 124 to Zhukovsky Airport from Migalovo the day before. The runway at the 6955th home base was adequate for the enormous bird, so long as she was empty, but load her up and it was a different story. Seventy-four thousand, three hundred ­fifty-two kilograms heavier than it was the day before, the An-124 now needed substantially more runway on takeoff than Migalovo provided. Zhukovsky was located some thirty-six kilometers southeast of Moscow along the Moskva River. It served not only as a civilian international airport, but also as home to Gromov Flight Research Institute, which added to the security protocols needed for sensitive missions like this one.

Apart from the performance and security reasons for changing airports, the two-hundred-kilometer flight served as a shakedown run for the crew of six—four of them new to Mikhailov. He had flown with one of the two engineers before, but the other, along with the radioman, navigator, and first of­ficer, were not from the 224th. Substitutions like this happened, especially on this type of mission, but the An-124 community was relatively small, and he was surprised he’d never met any of these men. Had he stood on ­firmer ground with respect to his wings, he would have asked more questions. Mikhailov knew his reputation as a skilled pilot was unmatched in the notoriously tricky Antonov, but his reputation as a drunk was just as well known, even outside the military. The new crew members observed him carefully during the preflight briefing for any evidence of alcohol.

He’d arrived early this evening, used his identi­fication card to badge his way through the concentric layers of gates, doors, and armed security personnel, making it to his airplane in time to watch the on board overhead cranes and powerful winches load the two twenty-meter-long wooden crates through the tail door. His flight manifest noted that the contents of each box were osoboy vazhnosti—of particular importance—what the United States called Top Secret. Their destination was Sary-Shagan in central Kazakhstan, making the classi­fication somewhat moot. Sary-Shagan was a missile test facility, so there was no question as to what these were. There were no markings, other than computer barcodes, but dosimeters affixed to the fore end of each crate left little doubt that the items inside were nuclear. As pilot-in-command, he had to be informed that each item weighed a little over thirty-seven thousand kilos. The length and weight narrowed it down a bit, some kind of medium-range missile, surely a new model, since they were on their way to be tested. Mikhailov was paid to transport, not to deduce.

It didn’t matter to him what he carried, so long as he was flying.

Attachment points on the missiles themselves protruded through small cutouts in the wood along the length of the crates, allowing the Antonov’s internal crane system to load each item through the massive rear cargo door and nestle them all securely in the bay.

There was room to spare.

Mikhailov had moved a battalion of soldiers, huge military trucks, tanks, other aircraft, even a rescue submarine. He and his fellow pilots were fond of saying they were capable of transporting the Kremlin, so long as the weight was correctly distributed.

The loadmasters would stow the massive tow bar in the rear cargo area after the Antonov was pushed back; then they would stay behind in Zhukovsky, leaving the unloading of this cargo of particular importance to their counterparts at Sary-Shagan.

With his preflight inspection completed, Colonel Mikhailov walked up the open aft cargo ramp, hugged the wall to pass the secured missiles, and climbed the stairs to the upper deck. The rest of the crew had already taken up their positions in the cockpit. They bid him the customary welcome deserving of a colonel and pilot-in-command, and he settled himself into the left seat. No matter how many times he climbed in behind the yoke of any aircraft, he still felt a sense of wonder that heated his belly like . . . well, like a good drink.

He put on a pair of reading glasses, ready to perform his portion of the pre-takeoff checklist, while the ­first officer, an imposing and broody man named Cherenko, read point by point from a laminated card. A civilian—or just as likely an FSB pilot—he wore dark slacks and a white shirt with three yellow stripes on the black shoulder boards.

A secondary warning light for the ­fire-suppression system in the cargo hold had not been replaced as per Mikhailov’s order the previous day, but he made the decision to wait until they returned to Migalovo. The remainder of the checks were unremarkable.

Mikhailov turned to the navigator seated behind him, who’d already received clearance and instructions for takeoff from Delivery Control. “Flight time?”

“Three hours and thirty-seven minutes, Colonel,” the navigator said. “Winds are on the nose most of the way. A Ural Airbus 320 coming in from the south reported heavy turbulence at flight level one-nine-zero.”

Mikhailov nodded, unperturbed. “Very well,” he said. “Let us be on our way. I know a woman there who makes very good mutton stew.”

“It is probably Kazakh horse cock,” First Officer Cherenko said and chuckled as he stowed the preflight checklist in the binder beside his seat.

“Whatever it is”—Mikhailov shrugged, deciding he did not like the man—“the stew is delicious.” He checked his watch—0104 hours—and leaned forward, adjusting the radio to hear the latest flight information service broadcast. He listened to the recorded message play all the way before giving a nod to the first officer. The trip from Migalovo the day before had established that Mikhailov preferred to let his copilot run the radios while he flew the airplane.

Military pilots spoke in Russian among themselves, and, to the consternation of pilots transiting from other countries, the tower sometimes did as well. But English was the international language of aviation, and this airspace was controlled by civilians. The tower controller put them in line behind an Il-76 heavy, cautioning them of wake turbulence from the departing giant.

A moment later the forty-six-meter, four-engine Ilyushin Il-76 lumbered down the runway, leaving invisible vortices of whirling wind behind it.

Cherenko read back the instructions as Mikhailov pushed the throttles forward slowly. The airplane began to shudder in place as he babied the four Lotarev D-18T turbofan engines for almost five full minutes before he released the brakes and began his takeoff roll. Slowly, steadily, the great bird picked up enough speed to heave herself off the runway.

“Positive rate of climb, Colonel.” Cherenko’s voice came over the intercom in Russian now, eyes on the altimeter. “Landing gear up.”

The massive Antonov was a touchy bird, but in Mikhailov’s capable hands more than a half-million pounds of airplane, fuel, and secret cargo flew with remarkable grace. 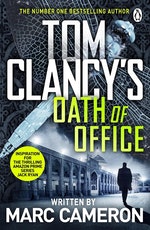