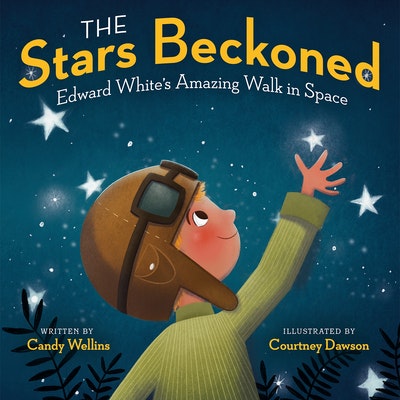 A lyrical picture book biography of Edward White, the first American to walk in space--and an ode to the beauty and wonder of the stars that brought him there.

Edward White
loved the night,
lived where stars were big and bright.

The evening sky--
so wide, so high.
Made him wonder. Made him sigh.

Edward White was the first American astronaut to walk in space. But before his spacewalk, he was just a boy who loved the stars. As he grew up, he would look up at the night sky in wonder--he knew that, one day, he would visit the stars themselves. In this touching and poignant picture book biography, we see how Edward's passion for the stars shaped the course of his life, and how he came to realize, even in the depths of space, what was ultimately most important to him--his family.

With backmatter containing photos and more information on Edward's life, Candy Wellins and Courtney Dawson deliver a book that is as much a feast for readers' eyes as the stars were for Edward's.

Praise for The Stars Beckoned:

"The right stuff for children with the stars in their eyes." --Kirkus Reviews

"An introduction to a space pioneer that’s ideal for the youngest nonfiction readers." --Publishers Weekly