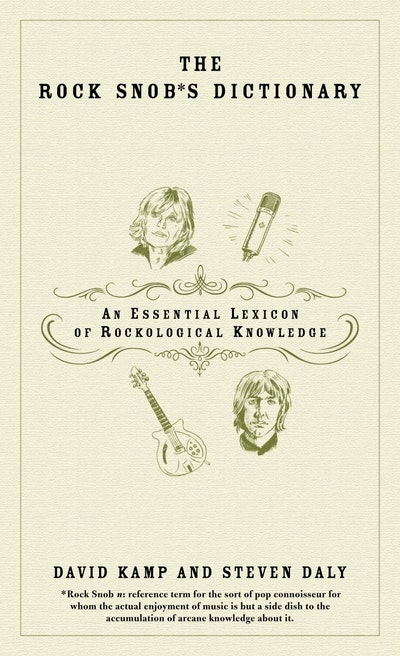 At last! An A-to-Z reference guide for readers who want to learn the cryptic language of Rock Snobs, those arcana-obsessed people who speak of "Rickenbacker guitars" and "Gram Parsons." We've all been there - trapped in a conversation with smarty-pants music fiends who natter on about "the MC5" or "Eno" or "the Hammond B3," not wanting to let on that we haven't the slightest idea what they're talking about. Well, fret no more! THE ROCK SNOB'S DICTIONARY is here to define every single sacred totem of rock fandom's know-it-all fraternity, from Alt.country to Zimmy. (That's what Rock Snobs call Bob Dylan, by the way.)

DAVID KAMP is a writer and editor for Vanity Fair and the author of The United States of Arugula, The Food Snob’s Dictionary, The Film Snob’s Dictionary, and The Rock Snob’s Dictionary. DAVID LYNCH is a James Beard Award—winning writer, sommelier, and restaurant manager, having served as wine director of Babbo Ristorante for seven years. Both authors live in New York City. ROSS MACDONALD’s illustrations have appeared in many publications, from The New Yorker to The Wall Street Journal.