Rosa Parks is one of the most well-known Americans today, but much of what is known and taught about her is incomplete, distorted, and just plain wrong. In this young readers’ edition of the NAACP Image Award—winning The Rebellious Life of Mrs. Rosa Parks, Jeanne Theoharis shatters the myths that Parks was meek, accidental, tired, or middle class. She reveals a lifelong freedom fighter whose activism began two decades before her historic stand that sparked the Montgomery bus boycott and continued for 40 years after. Readers will understand what it was like to be Parks, from meeting her husband, Raymond, who showed her the possibility of collective activism, to her years of frustrated struggle before the boycott, to the decade of suffering that followed for her family after her bus arrest. The book follows Parks to Detroit, after her family was forced to leave Montgomery, Alabama, where she spent the second half of her life and reveals her activism alongside a growing Black Power movement and beyond.

Because Rosa Parks was active for 60 years, in the North as well as the South, her story provides a broader and more accurate view of the Black freedom struggle across the 20th century. Theoharis shows young readers how the national fable of Parks and the civil rights movement—celebrated in schools during Black History Month—has warped what we know about Parks and stripped away the power and substance of the movement. The Rebellious Life of Mrs. Rosa Parks illustrates how the movement radically sought to expose and eradicate racism in jobs, housing, schools, and public services, as well as police brutality and the over-incarceration of Black people—and how Rosa Parks was a key player throughout.

Rosa Parks placed her greatest hope in young people—in their vision, resolve, and boldness to take the struggle forward. As a young adult, she discovered Black history, and it sustained her across her life. The Rebellious Life of Mrs. Rosa Parks will help do that for a new generation. 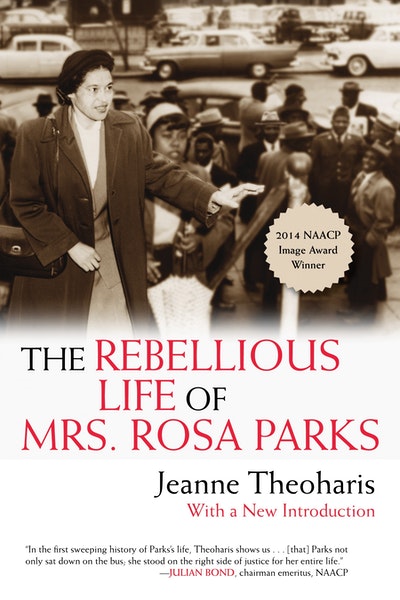